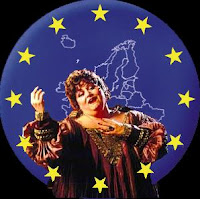 Anyone who reads the Tundra Tabloids regularly, knows that the TT has little to say about the positive aspects of the EU and the people that gladly run it,… until now that is. The EU elite make it so easy to highlight their gross arrogance and contempt for the average tax payer in Europe, that it’s only a matter of time before the whole project comes crashing down on its head.

Thanks to the Brussels Journal for posting the video that shows MEP’s hustling the EU gravy train system, where they show up on Friday morning to “sign in” before dashing off home for the rest of the day. What a neat scam!
Thankfully an Austrian TV network catches MEP’s on the spot and we are shown how they either walk past and and “sign in” on Friday morning for the day, in order to get paid, or scurry away like rats, choosing rather to forgo a days pay than risk being shown on camera violating every moral principle in civil government. In other word, the trust of the people.
Watch and laugh and learn, but get angry as well, these people are making a laughing stock of us all. Time to end the farce called the EU and return to a loose economic confederation of democratic states. Anything built upon the Belgian model is a disaster in the making. *L* KGS