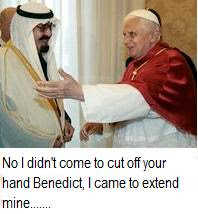 Place this in the catagory of “I believe it when I see it.”
The Vatican is believed to be holding talks with Saudi authorities over opening the first Roman Catholic church in the Islamic kingdom, where Christian worship is banned and even to possess a Bible, rosary or crucifix is an offence. The disclosure came the day after the first Catholic church in Qatar was inaugurated in a service attended by 15,000 people and conducted by a senior Vatican official.
The Vatican and Saudi Arabia do not have diplomatic relations. However, Archbishop Paul-Mounged El-Hachem, the Papal Nuncio to Qatar, Kuwait, the UAE, Yemen and Bahrain, who attended the Doha inauguration, said that moves towards diplomatic ties were under way after an unprecedented visit to the Vatican last November by King Abdullah. This would involve negotiations for the “authorisation of the building of Catholic churches” in Saudi Arabia, he said.
The Tundra Tabloids promises that it’ll break out Ol’ squeaky the flying pig, in the event that ground is broken for the building of a Roman Catholic church in the Saudi Kingdom. Such a move would be very monumental, since it’ll mark the first church built since the marauding desert bandit tribes of Mohamed destroyed the last remaining christian churches in the Arabian peninsula centuries ago.
The question remains, if a church is ever indeed built, how long before Islamic purists -no lack in that region of the world- try to blow it up. Another question to answered would be, how long would the House of Saud itself stand, after the project got under way? More here. *L* KGS