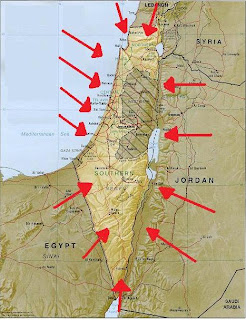 Palestinian Authority Abandons Two State Solution, Intends to Flood Israel With Arabs For Its 6oth Anniversary as an Independent State…….
It’s what the Arabs have been planning all along to do, so at least they are once again out in the open with their desire for the destruction the Jewish state of Israel.
The Palestinian Authority is planning to mark Israel’s 60th anniversary by calling on all Palestinians living abroad to converge on Israel by land, sea and air.
The plan, drawn by Ziad Abu Ein, a senior Fatah operative and Deputy Minister for Prisoners’ Affairs in the Palestinian Authority, states that the Palestinians have decided to implement United Nations Resolution 194 regarding the refugees.
Article 11 of the resolution, which was passed in December 1948, says that “refugees wishing to return to their homes and live at peace with their neighbors should be permitted to do so at the earliest practicable date, and that compensation should be paid for the property of those choosing not to return and for loss of or damage to property which, under principles of international law or in equity, should be made good by the Governments or authorities responsible. The initiative is the first of its kind and is clearly aimed at embarrassing Israel during the anniversary celebrations by highlighting the issue of the “right of return” for the refugees.”
Never mind the fact that Article 11 was rendered NULL AND VOID by the Arabs’ rejection of the Jewish state. Never mind the fact that when talking about refugees, there are only 200 000 actual Arab refugees left, and that the Arab states had made over 800 000 Jews throughout the Arab Middle East into refugees as well. If the PA actually signs on to such a scheme, the mask of their “acceptance of the two sate solution” has dropped once and for all.
The US and the rest of the international community must then recognize that the Palestinian Authority should be disbanded, control once more exerted by Israel over the entire area, until such a time arises that the Arabs are ready to give up their dream of a greater Palestine. What is of importance is not what the Arabs plan to do, but how the US and the Europeans react to it. Any sign that the West is shifting towards the binary state solution (destruction of Israel) should send warning signals to Israel and its supporters, and is something that should be condemned outright, in very clear language. More here. *L*
Al Avai includes a comment from Isay: They can do it instead of going to Mekka this year, the odds to survive are better!
UPDATE: David Hornik is interviewed today on FPM, and delivers yet another accurate analysis of the current situation in the conflict between Israel and the Arabs, and what Israel must do in order to confront the new dangers directed at the Jewish state.
UPDATE: P. David Hornik, Frontpage columnist, freelance writer and Middle East commentator sent the Tundra Tabloids the following in regards to this post and his interview:
Many Thanks! It sure isn’t hard to see the true face of the PA.
So right you are David, so very right indeed. Thanks for the permission to quote you. *L* KGS