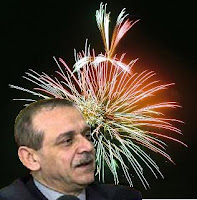 Kosovo, “the Gaza Strip of the Balkans” is seen by the Palestinian’s chief negotiator, Abed Rabbo, as the proper role model for the Palestinians to emulate. If it worked for them, then it’ll work for us!

Abed Rabbo drew an analogy between the Palestinians and Kosovo, which declared independence from Serbia on Sunday. “Kosovo is not better than us. We deserve independence even before Kosovo, and we ask for the backing of the United States and the European Union for our independence,”

But wait, the PLO had already tried that back in 1988!

The fly in the ointment is that the Palestinians have been offered on more than one occasion, just that, but they have shelved each offer, due to an unwillingness to end their terrorist war against Israel. Still to this day, for many within the Palestinian camp, the desire of wanting to get rid of the state of Israel is stronger than the one for building a democratic Palestinian state, so the war continues. More here. *L* KGS

FROM THE COMMENT SECTION: The ever dependable TINSC adds:

The Palestinians declared their independence a long time ago. The Arab League nations all recognize it. Many countries recognize “Palestine” and even have embassies. This includes some European countries. The United States is one of the very few nations standing in the way of full international recognition of Arab statehood in Palestine. Yasser Abed Rabbo knows this. He knows that Arab Palestine declared its independence long ago. He’s merely grandstanding for the mainstream media.