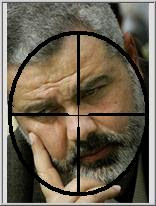 The launching of rockets from Gaza into Israel cannot be allowed to continue, and warning signs of Israel resuming its policy of targeting Hamas’ leaders, are now being flashed by Israeli officials.

If the Kassam rocket fire on the western Negev continues unabated, the government will have to decide whether to further ratchet up its reactions by targeting top Hamas political leaders, government officials told The Jerusalem Post on Thursday.

According to the officials, Israel has in recent weeks gradually stepped up its response to the Kassams, first targeting only those involved in firing rockets, then targeting well-known terrorist commanders and officials, and then going after symbols of Hamas power in Gaza, such as the strike on a Hamas police installation in Khan Yunis on Thursday that killed seven people.

The next logical step, according to the officials, will have to be a decision whether to target the top political leadership, as Ariel Sharon did in March 2004 when, within the span of a month, Israel killed Hamas founder Sheikh Ahmed Yassin and top leader Abdel Aziz Rantisi.

That is the way things are going, due to Hamas willingly backing itself into a corner that it knows it can’t come out from. For Hamas to capitulate on its stated desires and goals, the destuction of Israel, would be the same as to their agreeing to cease being Hamas, the Palestinian branch of the Egyptian Muslim Brotherhood.

The whole idea of dumping the entire Gaza mess into Egypt’s lap is becoming all the more attractive with each day’s passing. Daniel Pipes has mentioned just that a couple of time in the past few weeks, and I believe that his idea has merit, it’s just the lack of will on the part of the Americans and Israelis, that keep it from becoming a reality. More here. *L* KGS