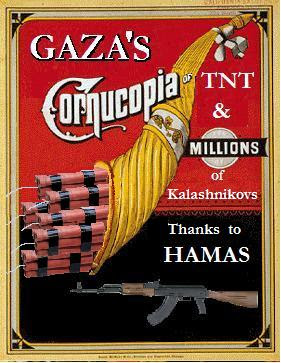 It’s not only the Gaza wall that came a tumbling down, so did the price for a ton of TNT.

The demolition of the Gaza fence along the Egyptian border, had been planned months in advance. The launching of Qassam rockets into Israel was the means to get Israel to tighten sanctions against Hamas, thereby giving the Hamas a pretext to blow preset demolition charges to the already weakend fence.

“Standing on the edge of the road, Hamad Kischta lights a cigarette and talks about prices.

“Everything’s gotten very cheap now,” says the Palestinian. Up until a week ago, the members of his clan were active smugglers, but now, with a huge hole punched in the wall between Gaza and Egypt, the value of the tunnels under the dunes has plummeted. “Kalashnikovs are going for only $300,” laments Kischta, “and the price of TNT has dropped from $15,000 to $5,000 per ton.”

One week after the opening of the border, Gaza’s Islamic Hamas government went on a weapons shopping spree and established a massive armory. As a result, instead of homemade Kassam rockets that are a threat to Israeli border towns, the country may now face rocket attacks with foreign made weapons that can reach large Israeli cities such as Ashkelon. “More Russian-grade rockets arrived in Gaza yesterday,” notes Kischta.”

Please take note of the fact that, Russian-grade rockets have made their way into gaza. In the recent J’Lem Post article I linked to in an earlier post today, it stated that:

“Pictures released by the IDF Spokesman’s Office showed two underground Kassam rocket silos, a meter in diameter and two meters deep. The launchers, the IDF said, were big enough to hold a Kassam or Grad-model Katyusha rocket that could be launched by remote control. The IDF estimates there are additional underground rocket silos throughout the Gaza Strip. Defense officials said the silos, discovered by the Golani Brigade’s elite Egoz Unit, proved the need for continued ground operations inside the Gaza Strip.”

The Hamas is setting the stage to escalate the violence with Israel, and the media here in Finland seem willing enough to overlook the real reasons why Hamas shut off its own electricity and blew that border fence. Time for the media to be responsible and report the news as it actually is. But I’m not holding my breath. The full Der Spiegel article viewable here *L* KGS