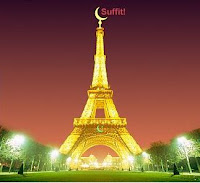 The French have been on “red alert” for some time now, so when Portuguese air traffic authorities pass on information to Paris that France’s national symbol is perhaps being targeted, it most certainly is going to be taken seriously.

What I find equally of interest, is the article’s vagueness and use of language surrounding the individuals or groups planning the attack. For one thing, planning an attack against a civilian target with the sole intention of spreading fear in the general public, is, an act of terrorism.

PARIS – French intelligence services are tracking the authors of a message apparently describing a militant threat against the Eiffel Tower, the daily Le Monde said on Friday. The newspaper said Portuguese air traffic authorities had intercepted a “vague and confused” short wave radio message apparently describing a threat on Thursday, but were not ”panicked” by the message, according to a police source.”

Going one step further, the individuals who were/are planning the attack on the Eiffel Tower, will most likely not turn out to be a bunch of Finns or Norwegians who had been treated rudely by the French police during an international football tournament in Paris. The terrorists in question will most likely be…(well you guess the nationality, and I’ll guess the religion)… Muslims. Only further into the article does it tell you that Islamists have been threatening Paris lately:

“Several apparent threats against Paris and prominent personalities have also been identified on an Islamist website and are being taken seriously following the murder of four French tourists in Mauretania last month, French media said.

Well, we can be very certain that it is indeed Muslim terrorists behind the plot to damage the Eiffel Tower, it would be refreshing for our news media to just come right out and say it in black and white. More here. *L* KGS