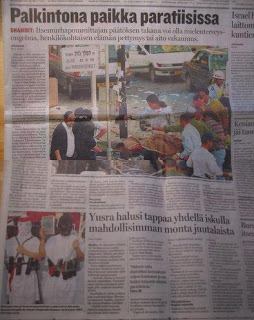 Finnish freelance journalist, Semy Kahan, has a couple of his excellent articles published in today’s Keskisuomalainen. “As a reward a place in paradise” explores the reasons why a person would decide to embark on a path of suicide/homicide terrorism.

Kahan draws the basis of his report from the experiences of three researchers on the subject, Anat Berko from the University of Herzilya, Ariel Merari from Israel and Martha Crenshaw from the US.

Kahan asks, “are candidates for suicide bombing mentally unstable individuals, religious fanatics or desperate people with a political agenda? All three elements can be found in their motives, but there are often other reasons as well.”

He then tells how the researcher, Anat Berko has come to the very same conclusion, especially with female suicide/homicide bombers. Berko has found some females “choosing” suicide/homicide terrorism as a means to regain a lost sense of honour for the family –that resulted from a supposed personal indiscretion on the females part– as well as to keep from being butchered in an “honour killing” by a family member.

Also mentioned was the phenomenon of the religious devout being tempted to do the same, by being convinced that 72 virgins await the martyr for Allah, with every sexual desire being fulfilled. The women suicide bombers who are condemned as whores, will once again be virgins as they enter paradise.

According to Berko, the thought of paradise is very real to the young, and they are being constantly drilled with this deadly message in their mosques. He even states something that is often reported on at the Tundra Tabloids, that even tiny children are being brainwashed into the Palestinian death cult.

Kahan mentions an Egyptian journalist, Ali Salem, who wrote in the Al Hayat: “The Palestinians need leaders that won’t send their young to blow themselves up in the name of Allah, but to school in order to prepare them for life.”

Wise words. Special thanks to Semy Kahan for an excellent article, and to the Keskisuomalainen for publishing it, I wish that the rest of the Finnish media would do the same, this is one phenomenon that needs to be understood in its entirety. *L* KGS

Note: In Kahan’s second article, he reports on how the “failed” terrorists (those that were either caught or for some reason backed out) express the desire to have wanted to kill as many Jews as possible.

Note: Article is viewable by subscription only