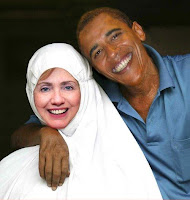 Ed Lasky over at the American Thinker blog, writes an interesting post that shows just how “out to lunch” Barak Hussein Obama actually is, concerning what he could accomplish as the US’s next president.

In an interview on former Senator Bill Bradley’s Sirius radio show, Barack Obama let it be known that if elected president, he would organize a meeting between Islamic leaders and Americans:

“I would convene a conference within my first year just gathering together Muslim leaders from all around the world, to describe for them what our values and our interests are, to insist that they need to help us to defeat the terrorist threats that are there, but to also recognize that they are bound up with us and that we have an interest in making sure that their societies can prosper and that we’re moving forward with them as partners with dignity and respect.”

Which Muslim leaders? Religious leaders who spout anti-West venom? The “leaders” of Muslim nations who are dictators and kleptocrats? The leaders who have ruined their own people’s futures by keeping their nations mired in the deep, dark past? Obama would find it difficult to find Muslim leaders who have any following who have not already been discredited by their own records? If Obama reached out to reformers, they would not have any impact.”

All great points, which underline the glaring vacancy in the “moderate” leadership department in the Islamic world. Lets face it, an Obama presidency would be a major setback in the war against Islamic fascsim. More here. *L* KGS