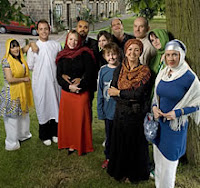 This is what happens when 3% of (in this case British) society is allowed to wield a very big religious stick, all in the name of tolerance and multi-culturalism. The Christmas season “be upon us”, and festive lights and decorations are filling up our streets and our homes in Christian Europe, along with the familiar programing highlighting our traditional religious holiday …right?

Well in Britain, the public is being treated during this Christmas holiday season to a Channel 4 three part series called “Make Me a Muslim“, which wonders: ‘Can Islam help repair the moral fabric of British society?” Non-Muslim Brits are “invited” to see what it’s like to become a Muslim, and experience how their religious views can effect change in one’s own private life.

The dreadfully insensitive and degrading timing of the program is one issue, the other is that it insists on insulting both Christianity, and British liberal society, by showing Muslims discussing just how inferior British Christian society must be to have allowed all these liberal freedoms, such as what one can think, wear, eat and who to love. Enough is enough.

Not only is Britain’s traditional religious background being made hash of, according to a hat tip from Vasarahammer, so is it’s flag, the Union Jack. British Gulf War hero, Sgt Ivan Ivanovic wanted to become a police community support officer, but was told that the British flag tattooed on his arm could be considered as a racist symbol, so he was subsequently banned from joining the force. Western Resistance has more on it here.

The idiocy of Europe’s blanketed tolerance doesn’t end with this, there’s more, too much more. Over at Islam in Europe, Esther noted the situation in the heart of Europe’s capital, Brussels. Christmas decorations ornamenting two trees at the entrance of the Law Courts in Brussels were removed, so as not to offend Muslims entering into the building. Read both the update and the comment to the post.

Then there’s the Inter Milan football club that is being sued for wearing their team shirt in a home game against the Turkish team, Fenerbahce. Their jersey has a “Crusader-style” red cross on it. The shock and horror of it all! To add insult to injury, the

same team had refrained from wearing the jersey while in Turkey playing on the oppositions “home turf”.

You see, any tolerance granted towards an ever increasing intolerant Islam, will only get you a reduction of, and seperation from, your own cultural heritage and religious traditions. *L* KGS

“According to the Catalan newspaper La Vanguardia, the Spanish football club Barcelona is altering its famous badge in some Arab countries in order to avoid offending Muslims.

The badge is especially altered in Saudi Arabia or Algeria, where the Barcelona shirts are being sold without the red cross of Saint George, the patron saint of the Catalan region which Barca claims to represent, the La Vanguardia newspaper found in a private investigation.

The badge, which was created in 1906, features a single vertical red line in Saudi Arabia and Algeria, due to the fact that there, the red cross represents the symbol of the brutal mediaeval Christian crusades against Islam.”