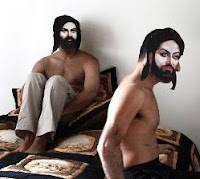 The municipal museum of the Hague rejects exhibit showing homosexual men with masks of Mohammed and his son-in-law Ali. According to Esther at Islam in Europe:

“The exhibition, “Adam and Ewald”, also shows Dutch homosexual men. It was prepared by Sooreh Hera, originally of Iran, who has now been living in the Netherlands for 7 years. Sooreh Hera says that the Islamic world holds a hypocritical attitude towards sex.

Homosexuals in countries such as Iran and Saudi Arabia are treated roughly while it is quite usual for married men to have sex with other men. But that is kept hidden. Hera photographed many homosexuals, two of which were of Iranian origin. According to Hera they did not ant to be recognized and therefore wore masks. In order to denounced the hypocrisy in the Muslim world, she used the faces of Mohammed and Ali”.

The hypocrisy within the Islamic world in regards to homosexuality, is as thick as the hypocrisy of dhimmifide Europe who trembles at the thought of “hurting the Islamists’ feelings”, while finding no problem with “art” that lampoons Christianity.

These Christians who have apparently had enough of anti-Christian snobbery in the secular art world, don’t riot or threaten, they just seek to compete. Let the Muslims learn from their example. *L* KGS