The American Thinker is running an article by Andrew Walden, titled: “The Ron Paul Campaign and its Neo-Nazi Supporters“.

Your Presidential campaign has drawn the enthusiastic support of an imposing collection of Neo-Nazis, White Supremacists, Holocaust Deniers, 9/11 “Truthers” and other paranoid and discredited conspiracists. Do you welcome- or repudiate – the support of such factions?

More specifically, your columns have been featured for several years in the American Free Press -a publication of the nation’s leading Holocaust Denier and anti-Semitic agitator, Willis Carto. His book club even recommends works that glorify the Nazi SS, and glowingly describe the “comforts and amenities” provided for inmates of Auschwitz.

Have your columns appeared in the American Free Press with your knowledge and approval? As a Presidential candidate, will you now disassociate yourself, clearly and publicly, from the poisonous propaganda promoted in such publications? As a guest on my syndicated radio show, you answered my questions directly and fearlessly.

Will you now answer these pressing questions, and eliminate all associations between your campaign and some of the most loathsome fringe groups in American society? Along with my listeners (and many of your own supporters), I eagerly await your response.

Medved has received no official response from the Paul campaign.

But that’s not all: 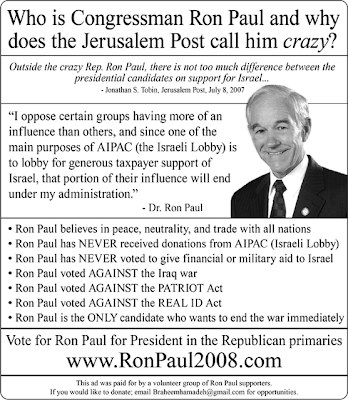 Ron Paul is also someone who believes that the US’s foreign policy vis-á-vis Israel is strong mainly due to Israel lobby groups, not the state of Israel itself.
If the Jerusalem Post is calling him crazy, then Ron Paul has only himself to blame for being labeled as such. RP is an isolationist in the extreme, and therefore, he is out of touch with reality.
Interestingly he has support from the fringe of the fringe in the racist sector of American society, yet he refuses to publically distance himself from such rabble. In all honesty, Ron Paul is a dud, not being able to pick up over 7% support int he polls on any given day.
Where he is getting his money from, though not being popular in the opinion polls… is anyone’s guess. *L* KGS