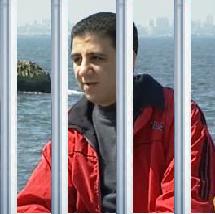 This story is so heart wrenching it hurts, especially when it’s pretty much understood that there is little next to nothing that can be done to stop it. It shouldn’t however, keep us from emailing or calling the Egyptian embassy. Click here for information on the Egyptian embassy in Finland. FREE KARIM SULEIMAN *L* KGS

Via Sandmonkey and Atlas Shrugs.

Karim who is an Egyptian blogger sentenced to prison for 4 years for ‘vilifying religions’ and defaming the president was tortured & that was ordered and supervised by an investigation officer in Borg Alarab prison. Karim was also ordered into a solitary cell where he was assaulted again and had one of his teeth broken; this assault’s date came to mark one year since Karim was sent to jail.

Karim reported his being tortured in prison to his lawyers in the Arabic Network and Hisham Mubarak Center, the torture came at the hand of another prisoner and a prison guard, ordered by Midhat Samir one of the prison’s investigations officers. This came to pass after Karim has uncovered some corruption act in the prison. Karim was punished and tortured severely which resulted in several injuries in addition to a broken tooth.

He was deprived from officially reporting the incident against the accused officer as well as denying him the right to document these injuries in a medical report. The Arabic Network for Human Rights information and Hisham Mubarak Centre for Law mentioned in their communiqué to the Prosecutor-General that the assault on Karim is manifested in the following:

Both of the legal firms” the Arabic Network and Hisham Mubarak Centre for Law” called for an immediate investigation into Karim Amer’s complaint as according to articles 126,127 and 129 of the criminal code, it fits into the specifications of a torture crime in addition to that, those allegations had they been true, they would represent an infringement to the International Covenant on Civil and Political Rights and also to the UN anti-torture treaty and other treaties on maltreatment, harsh punishment, non- humanitarian or degradeful treatment which Egypt signed on and ratiefied.

It is to mention that Karim since he was imprisoned is subjected to a systemic discriminatory practice and maltreatment in Borg Alarb prison on the hands of the prison’s officers. He mentioned to his lawyer that the maltreatment was always coupled with this phrase “This is until you do change your mind”!! This represents a threat to his life and compounds the difficulty of the already harsh sentence. The two legal firms are calling for transferring him into another prison where he might receive a better humanitarian treatment and where his rights as a prisoner might be respected.

I wish I could say I am surprised by this, but I have heard and seen so much of this, that, as horribly as that sounds, it kind of becomes expected. We are ruled and governed by Monsters who have no respect for our human rights or dignity. They just waited until his story wasn’t that “Hot” anymore and went ahead with it.

In this country, with the exception of those of us who believe in human rights, who is gonna defend him? A guy who insulted the prophet getting tortured? The public response is gonna be : “Good. That’s exactly the kind of person who should be tortured! Make an example out of him.”

God knows that the day of his sentencing, and I was there for the majority of the trial, the public outside were debating how he should be killed. Some were like, “he should be hanged”, others were like, “No, we need to go islamic on this. Behead him.”, while others demanded that people have some common sense and instead of being all barbaric with the beheading, they should “just stab him”.

And that’s the average egyptian on the street. Imagine the people in prison’s reaction. And then ask yourself: would the sadistic bastards who run our prison system think twice about torturing this guy? They might’ve during the trial, when the spotlight was on him. But now? Forget about it. He is fairgame, and his jailers know it.