A lot has stranspired in the blogosphere over the recent Counterjihad conference that took place in the city of Brussels, Belgium. I can’t think of anything more divisive to the Counter-Jihad movement than to see many of the “big name anti-Islamism blogs” positioning themselves on either side of the debate, on whether or not it was wise to have allowed the Vlaams Belang and Swedish Democrats to participate in the conference. (I still feel that in the anti-jihad blogosphere, we’re all on the same side)

I was one of the bloggers from Scandinavia that was asked to participate, as well as present a report on the situation of Islamism in my own country of Finland. I was greatly honoured to be asked to be there and participate with “the many” who man the front lines that are set against the tidal wave of anti-democratic/anti-pluralistic lunacy that has been unleashed against the shores of Europe, and western civilization.

The dye has been cast and the lines have been drawn, perhaps it was inevitable. On the face of it, the concerns many have had in regards to the VB and SD parties, IMHO, were reasonable, they of course need/ed to be addressed. But some in the blogosphere have taken it upon themselves to be the vanguard of a special “ideological purity” which insists that “they alone know best”, and have taken measures to ensure that they will try to frustrate any of the fruits that might evolve from such a conference.

I came across the recent post by Baron Bodissey at the Gates of Vienna, and his words, as well as the comments by one of the European attendees were so profound, that I feel it neccesary to post (in part) them here. Long live the spirit of Oriana Fallaci. *L* KGS 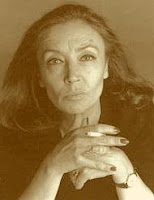 “One of the greatest privileges of my life has been to meet Bat Ye’or at the Counterjihad Summit and sit next to her on the dais while she gave the keynote speech. She is small in stature and mild in voice and manner, but she speaks with authority, with a calm assurance born of a mastery of the facts.

With full knowledge of the horrifying future that awaits Europe — and the rest of the West — she maintains an equanimity which is an inspiration to us all.The Italian delegation to the Summit traveled there to give Ms. Ye’or the Oriana Award, in memory of the late Oriana Fallaci. Ms. Ye’or and Ms. Fallaci were friends and frequent correspondents.

Bat Ye’or helped her friend in her literary struggle against political Islam by providing her with material from her researches. One of the Italian ladies referred to Ms. Ye’or as “the Muse of Oriana”. 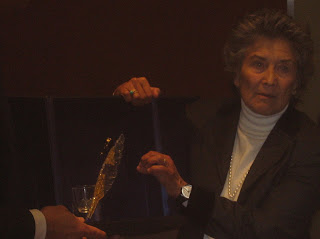 The presentation of the Oriana Award was the most moving moment of the conference.One of the European attendees at the Counterjihad Summit, angered by the insults hurled at our efforts from several corners of the blogosphere, wrote me this email earlier today:

Charles needs to block himself off from reality completely, to be able to uphold two contradicting things: his photo of Oriana Fallaci on the sidebar of his blog, while doing all in his power to bring down our conference (a conference so bad to him that he considers it a no-brainer that Oriana wouldn’t have attended, and considers it arrogance off-the-scale to even suggest the idea).

Who will tell him about how the memorial fund started by Oriana’s friends handed out the Oriana Award at the conference? To Bat Ye’or. A moment that caused a bit of a problem for a big boy like me, because my eyes were brimming with tears. When Bat told us how Oriana called her late at night when she was soon about to die, I had to bite my lips hard so that I wouldn’t start crying for real. I think so many of us could see ourselves in the desperation of Oriana in that moment.