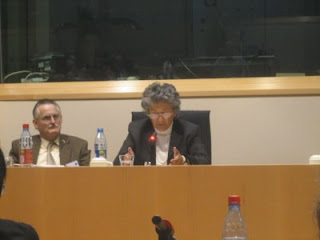 Bat Ye’or is both a scholar and author of a number of books that include: Eurabia: The Euro-Arab Axis (2005), Islam and Dhimmitude: Where Civilizations Collide (2001), The Decline of Eastern Christianity: From Jihad to Dhimmitude (1996), and The Dhimmi: Jews and Christians Under Islam (1985).

At the recent Counterjihad Conference in Brussels, Bat Ye’or delivered a stark appraisal of how far Europe has gone in the dhimmification process, that started about forty years ago. *L* KGS

The title of this lecture was not chosen by me, but I found it excellent and will try to examine how deep the damage is now. I will start by a warning: have no illusions. The Eurabia in which we live is solidly established although there are some improvements since the election of Angela Merkel and Nicholas Sarkozy, and also the realization by more and more people that things cannot go on like this.

For 40 years Eurabia has built its networks, its finance, its hegemonous power, its totalitarian control over the media, the universities, the culture and the mind of people. If one wants to end this system, one will have to reverse decades of policy. In fact, I do not know how we can get rid of a culture; we still live with Nazism, the genitor of Eurabia, with fascism and communism which have structured its networks system.

And this is not said by me only, but by others who know well this subject: Vladimir Bukovskij and Pavel Stroilov in their book: EUSSR (European Union of the Socialist Soviet Republics).

The EC correlated a massive Muslim immigration to a strategy of peace and stability in the Mediterranean, hoping that the Euro-Arab symbiosis through economic development, soft diplomacy and multiculturalism would guaranty peace, markets and oil.

In the Euro-Arab policy, Muslim immigration is welcomed as an element of a Mediterranean geo-strategy conducted as a partnership with the Arab-Muslim world on the base of pacifism and continual funding and services provided to the Arab world, similar to the subsidies given to the economically underdeveloped EU member-states. The European Investing Bank is the model for the Mediterranean Investing Bank. (and here)

This strategy had also an ideological perspective: the refusal of any more war – peace at last by resorting to economic agreements and mutual concessions. However this laudable formula, which succeeded for the integration of Europe, was not adapted to deal with a Muslim world that conceived its international relations only in the framework of jihad.

Worst, the Nazi evils came back with a vengeance in the Euro-Arab alliance so similar to the Vichy-Berlin-Arab and Palestinian Nazi and Fascist axis of the thirties and forties against Jews, democracies and America. These evils had not died after World War II, and they reemerged within the Eurabian-Arab Palestinian jihad against Israel.