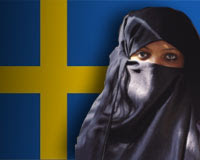 In today’s Local, a headline declares that half of Swedes questioned would prefer a ban on Islamic scarves for girls and women in both schools and the work place.
The Local: ‘Ban headscarves’ say half of Swedes’. “Islamic headscarves ought to be banned at workplaces and in schools – that’s the view of half the people surveyed in a new Swedish poll.The poll, the third of its kind taken by Uppsala University to measure Swedes’ views of diversity, shows a rising number of people supporting a headscarf ban.
In 2005, 43 percent wanted a ban on Islamic female head coverings. This year, 49.8 percent of the 1,065 people asked supported a ban.
The article goes on further to say that the results of study is open to interpretation, since the word “sölja” could mean any number of different coverings.
“The results the poll are open to some interpretation. The questionnaire asked people for their view on the banning of the ‘slöja’ or veil, indicating a garment covering the face as well as the top of the head, such as a burqa or a niqab. However, in common parlance, the word ‘slöja’ is often used to describe all sorts of female Islamic head coverings, including those that just cover the hair.”
For example, the Finnish news agency YLE translates the word into “huntu”, meaning veil, with the picture included with the story proving how they interprited the word. I have always maintained that the wearing of an Islamic scarf in a western country is a non-issue. However, any kind of facial covering shouldn’t be allowed, due to not only western habits and traditions, but also because of the security risks such a garment poses to society. More here. *L* KGS
Note: The study in Swedish is viewable here.