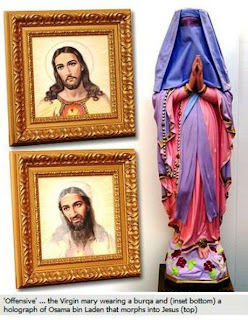 Sorry, but if the statements from the two artists –who created the two pieces of art– are to be believed, then I just don’t see the deviousness behind the two competition entries.

Via Pamela at Atlas Shrugs. An Australian art competition –the Blake Prize, Australia’s top religious art competition– has raised alot of eyebrows and has drawn some considerable condemnation from Australians politicians (Left and Right), over the offensive nature of the art piece entries. Australian PM, Howard Brown stated that:

“The choice of such artwork is gratuitously offensive to the religious beliefs of many Australians.”

While Brown’s opponent in the upcoming election, Labor’s Federal Opposition leader Kevin Rudd, declared in a TV report that :

Well then, what do the two artists say of their intentions behind their works?

“Queensland lawyer Priscilla Bracks told The Daily Telegraph her double portrait was not meant to compare Jesus with bin Laden, but was a commentary on the way the terror leader was treated in the media. She was concerned bin Laden would be unintentionally glorified in years to come.”

“Sydney artist Luke Sullivan, who created the Virgin Mary piece entitled The Fourth Secret of Fatima, said his work was not meant to be controversial but provocative.
“It poses the question of what’s the future of religion,” Sullivan said. “They (religions) are hegemonic in their nature. They can be all-encompassing and powerful.”

The first artist said she clearly wasn’t equating the two objects, the second was indeed guilty of doing so, by creating a symmetry between the two faiths. But as history as shown, who can deny that Christianity hasn’t been hegemonic and all-encompassing and powerful?

The truth of course is that the difference between the two faiths are as vast as they are deep. Christianity does not hold political power, though its members hold political office, while Islam is very much political, commits murder and mayhem in the name of its god, while pointing to its prophet as the perfect role model for such behavior.

The main point I find questionable in all of this, is the double standardness of the promoters of these “art exhibitions”, who most certainly would balk at allowing a “dog-Mohamed” drawing, or a “gay Mohamed” painting or sculpture. Christianity is just an easy target/subject material to deal with. The artists gets the attention they seek, from the expected public reaction to their provocative pieces, but do not expect it to go any further than that.

Presently, I do not see Christians in Mexico, or in any other western state with sizable Christian populations burning Australian flags, and calling for the death of the artists. There won’t be, Christians, speaking of the 99.99%, are too mature for such nonsense. Perhaps the Muslims world wide that are observing this scenario from afar …could learn from it. More here. *L* KGS