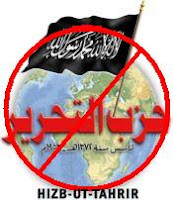 Who says the Islamists don’t pay attention to Leftist rehtorical slander? What’s even more laughable and ironic about Fadi Addullatif’s worry over the future of Danish democracy, is the religious ideology his group “Hizb ut-Tahrir in Denmark” represents.

Hizb-ut,-Tahrir is an Islamist group that seeks the same goals as Al-Qaida and a host of other Islamist groups, but through peaceful, non-violent means (a.k.a. subversion of democracy to further their own intolerant, non-pluralistic agenda). What this creep & group are pushing for, is a dictatorship of their very own, …of the religious variety.

I doubt if this group can remain non-violent for long. Islam in Europe has the rundown on what took place at the HUT conference, as well as on what has taken place in Denmark since Justice Minister Lene Espersen, stated that it is time to review the question of whether HUT is condoning violence.

Being a strict follower of Mohamed’s teachings, I can’t believe that their members would refrain from violence ….for long. *L* KGS