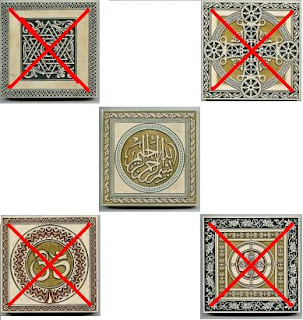 Answer: Symbols of the world’s great religions – Christian, Judaic, Buddhist and Hindu – will never be seen in the Kingdom of Saudi Arabia.

Why? Because Islamic traditions –that stay true to the teachings of their prophet– are exclusive and intolerant, that’s why.

Generally speaking, when Muslim leaders talk of promoting dialogue between the great religions, they do not approach the discussions from the viewpoint that all other religions deserve the same respect and tolerance that Islam expects.

On the contrary, Islam believes that both have books (that supposedly teach Islam) but that they have been corrupted by the adherents of the two faiths, having strayed from the supposed true followings of Islam. In that context, True Islam can never believe that they are dealing with two completely different religions. So any supposed dialogue “between religions” is based on false pretences from the very beginning.

All “other religions” well, they’re to be done away with as well, either through invite, or through jihad. It doesn’t matter to the “true followers of Islam, as long as the end result is the same. *L* KGS

LGF has a post on the latest example of religious apartheid in the Saudi Kingdom.

Update: To highlight the “there is no compulsion to convert in Islam” meme, the Winds of Jihad has a perfect story on just that. More here.

“PESHAWAR: Members of Christian and Hindu communities settled in the city have been threatened by the so-called militants through a stunning letter to convert to Islam or face suicide attacks, sources confided to The News here on Wednesday.

The intimidation sent the alarm bells ringing at the headquarters of law-enforcement agencies as well as among the senior government functionaries.The threats, according to reliable sources, were hurled to the Christian community settled in different parts of Kohati, interior city and cantonment through a number of letters. Similar letters, it is learnt, were also dispatched to the elders of Hindu community scattered in jurisdiction of West Cantonment police station.

“You are invited to embrace Islam and make your home in heaven. If you did not comply, you will be eliminated till Friday August 10,” read a letter dispatched to members of the Christian community in interior city. The dispatchers introduced themselves as members of previously unheard organisation, Al-Jihad. “It is a sensational letter that shows the non-seriousness of the dispatcher or dispatchers. The heading of the letters is ‘knock of the death’ while the rest of the text carried dialogue-like words that are generally used in films,” a senior government official, requesting anonymity, told The News about the letter received by a Hindu community member.”