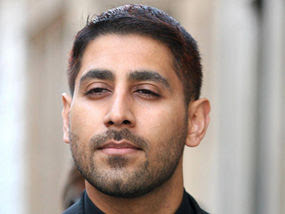 Omer Butt:I would rather see them in pain,
than not wearing the hijab
This is the second time this punk of a doctor has been caught enforcing his political-religious views on his patients, refusing to treat female patients who do not conform to Islamic dress codes. The man should have his licence shelved for a few years and then eventually revoked if he refuses to act upon the Hippocratic Oath that reads in part: “To keep the good of the patient as the highest priority. ” There is a long list compiled of Muslim doctors in professions who regard Islam to be more important than the people they are to be treating, like those who support and help carry out acts of terrorism, even allowing people to die. like “Muslim doctor, Osama Ahmed Ibrahim, MD, who deliberately let Jewish patient Joseph Applebaum die,” (Debbie Schlussel July 03, 2007).The British NHS allowed this scumbag of a dentist to remain in the health service after denying dental care, due to his Islamic views, which would be more than enough evidence to have him removed from health care for good. But alas, in this day and age, government officials make health decisions based not on the general welfare of the people, but on politics, which puts the patient at risk due to this moron’s continued licence to practice dentistry. If the NHS refuses to severely discipline this quack this time around, which at the minimum demands an immediate shelving of his licence to practice dentistry, they should then begin referring to their agency as the National Halal Service. KGSMuslim dentist ‘refused to treat female patients
unless they wore Islamic dress’

A Muslim dentist refused to treat patients unless they wore traditional Islamic dress, it was alleged today. Omer Butt, 32, ordered women to put on head scarves or he would not register them or their families at his NHS-funded clinic, it was claimed. At least two patients were left in pain after they declined to follow his self-imposed rules, the General Dental Council heard. It is the second time that the dentist – who is the brother of a former spokesman of the radical Islamic group al-Muhajiroun – has appeared before the council’s disciplinary panel on similar allegations. Two years ago he was reprimanded for telling an Asian mother-of-two he would not register her unless she wore the Muslim hijab. The GDC heard how Butt believed it was his duty to stop Muslim patients committing what he believed was Al-Kaba’ir, a religious sin. He even put a laminated sign on the wall of his waiting room telling patients they would have to adhere to his strict dress code or find another dentist. John Snell, for the GDC, said: ‘He sought to impose a dress code on patients attending his practice. ‘He required that women cover their hair with a head scarf, or hijab, and that male patients remove any gold jewellery. If he had simply expressed a preference, without imposing any compulsion to adhere to this dress code, there may be no cause for complaint. ‘However, he insisted – and those who did not comply were refused treatment.