The numbers get even starker when asked whether Finland should institute the exact same policy as Greece, with 65% in favor and 21% not in favor. I can state with a high degree of certainty that the HS poll did not coincide with the paper’s ideology, in that they chose to run the 59% vs 24% question first. The main question of how Finland should act in a similar situation was met with an even more decisive response.

Clearly the HS did not want to headline their article with “An Overwhelming Majority of Finns Would Want Similar Greek Response to Migrants on Border”. That is the news, that was the headline they chose not to run with, because they’re first and foremost, a political outfit with a narrative to push, so they choose the 2nd greater number and pass it off as a small majority. That’s called spinning the news. 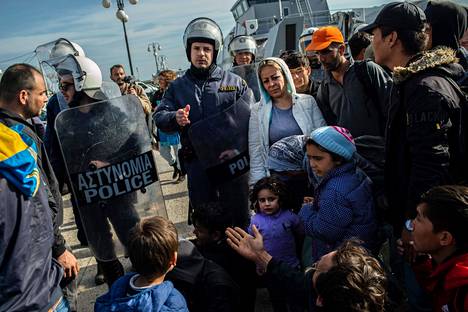 The majority would require Finland to act like Greece if the number of asylum seekers was the same as for Greece.

A small majority of FINNS accept Greece’s decision not to admit asylum seekers. This is the opinion of 59% of citizens.

This is clear from a survey conducted by Kantar TNS at the request of HS.

About one in four said in the poll that they did not agree with the Greek decision.

Around one in five thinks that Finland should not block the entry of asylum seekers, even if the number of entrants is very large. Thousands of people have come to the GREEK -Turkish border after Turkey said it was opening its border to Europe a couple of weeks ago.

Greece has stated that refugees will not be admitted.

In addition, Greece has stated that it will not receive asylum applications for one month. According to the UN, the decision violates international agreements.

72% of MEN and 46% of women approve of Greece. A similar division emerged when respondents assessed how Finland should act in a similar situation.

In this situation, 72 per cent of men would like Finland to block the entry of asylum seekers and 56 per cent of women.

The Greek solution is accepted by the majority of all age groups. Those under the age of 30 were most against Greece. 31% of them did not approve Greece.