The Deep State in all of its ugliness on display…

It’s all an inside hit-job. The unelected portion of the US government running anti-democratic operations against an existing administration. This is but a continuation of the Obama/Brennan operation against then-candidate/president Trump. The administrative state (Deep State) orchestrating a coup against the people, it’s right there before all of our eyes, and if not for the in-the-bag media, it would be already hammered into prison sentences and executions.

NOTE: The bureaucracy is full of sniveling little weasels like this on.

* We can say “deep state” now.  CIA officials have clarified that there is one, and that it’s something to be proud of.

There’s hardly any record online of Eric Ciaramella, a CIA employee and former NSC staffer whom some believe to be the “whistleblower” who filed a complaint in August about the 25 July 2019 phone call between President Trump and President Volodymyr Zelensky of Ukraine.

Certainly there is little in the way of photos.  Thus, a tiny collection of fewer than a handful of images has gone viral.  One photo most readers will have seen is this one: 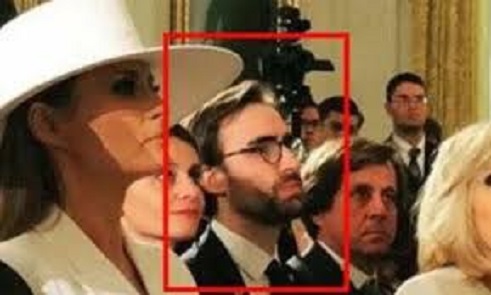 In it, Ciaramella is seated in a row behind France’s First Lady, Brigitte Macron, and First Lady Melania Trump.  He is also seated next to a woman whose identity I haven’t yet unraveled (although she seems familiar).

The circumstances that placed Ciaramella in that particular image would probably be of considerable interest.  The reason is this:  Ciaramella was no longer working at the NSC when that photo was taken, and hadn’t been there for at least nine months.  As far as the public knows, when he left the NSC staff in the summer of 2017, he left the White House.

But that photo was taken on 24 April 2018.  From what we think we know, Eric Ciaramella had gone back to the CIA at that point.  In fact, there had reportedly been a bit of a dust-up in the summer of 2017, when Ciaramella – who came to the staff in the summer of 2015 – had been made then-National Security Adviser H.R. McMaster’s deputy.  Blogger Mike Cernovich posted allegations that Ciaramella was a major source of leaks from the NSC staff, and was working against Trump’s policies.  According to political website reporting, Ciaramella decided to return to the CIA a bit earlier than he was scheduled to.  (His move from CIA in 2015 was probably a detail for at least 24 months.)

Readers, again, will be familiar with the basics about Ciaramella, chief among them being his assignment to Eastern European matters at the NSC staff.  That’s a key reason he is suggested to be the “whistleblower.”  He had worked Ukraine issues during his time at the White House, and in particular had worked with then-Vice President Joe Biden on them.  He also participated in bilateral events with Ukrainian delegations, in at least two cases alongside Democratic operative Alexandra Chalupa.

So, to cut to the chase, it seems odd that Ciaramella, an Eastern Europe specialist and mid-level CIA employee who no longer worked at the White House, would be present in a second-row seat among top-level White House staffers for the joint press conference held by Presidents Trump and Emanuel Macron of France during the Macrons’ state visit in April of 2018.  Someone seemingly had to go out of his way to make that happen – and seemingly, someone did.

This is odd whether Ciaramella is the “whistleblower” or not.  It’s odd in its own right, and it gets odder.  Immediately after the press conference (visual documentation below), Ciaramella attended the luncheon hosted for the Macrons at the White House by Vice President and Mrs. Pence.  These events were the same day, 24 April 2018.

The question asks itself: who is this guy?  Why would he be invited to these high-level events if he no longer worked at the White House?  To a Washington hand, he just looks like a stray GS-13 wandering around.