The case is so complex? Not if you follow the facts and are independent and clear-minded in thinking… 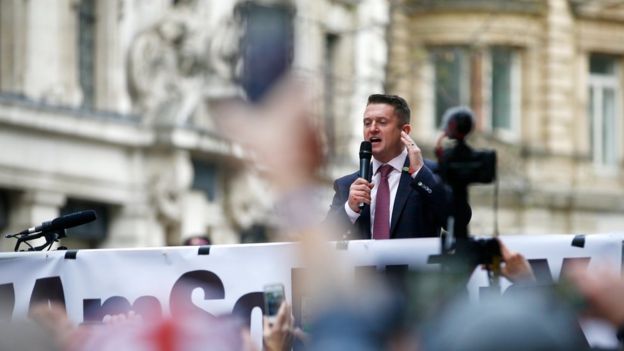 Mr. Robinson appeared at the Old Bailey on Tuesday, facing an allegation that he had committed contempt by filming people before a criminal trial.

But within minutes Judge Nicholas Hilliard QC ruled it needed to be referred up for further consideration.

The 35-year-old appeared under his real name, Stephen Yaxley-Lennon.

Hundreds of supporters and opponents were outside for the hearing.

Why was he in court?

In May 2017, Mr Yaxley-Lennon filmed four men outside a court, who were later convicted of gang-raping a teenage girl.

The trial was subject to reporting restrictions, and a judge at Canterbury Crown Court gave him a three-month suspended sentence for contempt of court.

In May 2018, he was jailed for potentially prejudicing a court case after broadcasting on social media outside Leeds Crown Court.

He was sentenced to 13 months – 10 months for the contempt of court in Leeds and a further three months for breaching the previous suspended sentence.