No matter how you cut it, she’s got an agenda to push…

Once again, for the sake of argument, lets just say that she’s right, that in fact she’s discovered an ancient viking burial garment with the word of allah inscribed on it, so what? Why is she placing all of her credibility into that finding other than to push a narrative? I wonder if any Gulf money is funding her research, just saying, but it would be interesting to know nonetheless. The fact that NO mention of the ancient Hindu symbol of the swastika very noticeable at the top of the picture is telling as well. Using her logic, the symbol should signify some kind of Hindu influence on Viking thinking.

The battle on how to interpret the controversial textile band from Birka continues. Now the archaeologist returns to tough criticism.

A so-called knit fabric band has attracted much attention. Or rather the textile optician Annika Larsson’s interpretation of the pattern woven by silvery wires.

By putting together symbols on different parts of the band, Annika Larsson has found what she considers to be the sign of “Allah.” But that interpretation has been tough criticism, mainly from the docent of Islamic art, Stephannie Mulder, Austin, Texas. Criticism has been captured on social media and has spread widely, and Annika Larsson has self-made me in the storm.

Annika Larsson has been accused of “cutting and clipping” in the pattern to get the sign of Allah by moving elements along the band. It does not say Allah but Lllah, a word without meaning, Mulder says.

“To claim that Lllah and Allah are the same is as absurd as claiming that Dud and God are the same, ” Mulder writes. 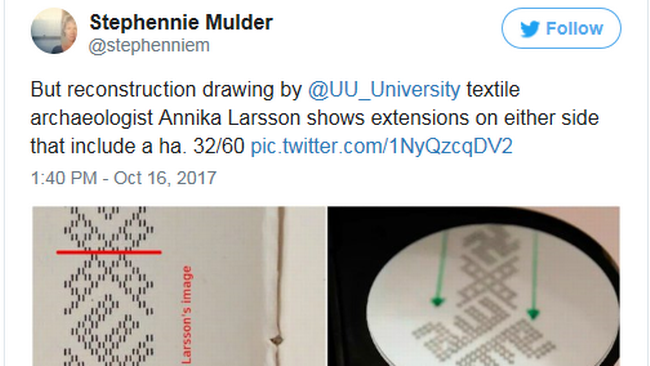