According to our buddy and colleague, Austrian, Elisabeth Sabaditsch-Wolff:

Kurz is still a globalist, follows plan to population change (Soros!!) Follows an agenda to return the lost conservatives to ÖVP from FPÖ. Strategy worked very well. Strache failed in generating and binding core voters. Big failure! Kurz has another 4 elections he must win in the coming 12 months. In order to do that, he had to change his wording. Automatically shift in the FPÖ’s direction. Kurz started a total recall of lost conservative voters. Strache knows: he stole my program, my voters.

Which coalition do I favor?

All of the coalition forms have major disadvantages. We must look for the one with the fewest.
ÖVP-FPÖ: Only if certain ministries are given to FPÖ.

The following major points must be part of the coalition agreement:
1. Fixing the broken Law on Islam
2. Removing the restrictions on freedom of expression1
3. Very restrictive asylum- and immigration policy
4. EU-politics against EU-superstate

Over for EU? Sebastian Kurz to form government in Austria: ‘I want to bring REAL CHANGE’

AUSTRIA’S conservative leader Sebastian Kurz has said that he wants to “bring real change” to the country as he forms his government. 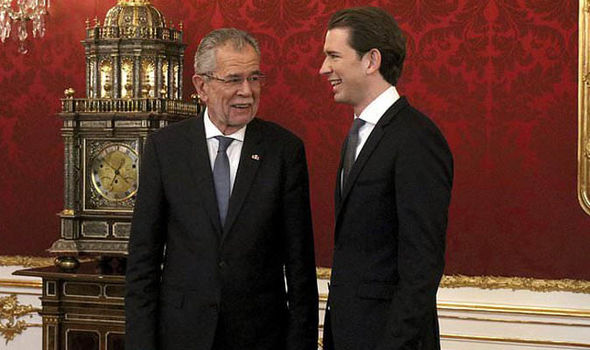 The new leader, 31, swept to power last week and has been formally asked by President Alexander Van der Bellen to forge a team.

Mr Kurz finished first in Sunday’s election after he secured 31.5 per cent of the vote, winning by a clear margin but falling well short of the majority needed to control parliament in the affluent Alpine republic.

He said: “I would like to build a government that has the courage and determination to bring real change to Austria.

“I will now get straight to work and hold the first discussions, definitely in the coming days, and possibly even today.”

He now plans to hold talks with all the parties in the new parliament.

Mr Kurz, who is the current foreign minister in the outgoing government, is on track to become Europe’s youngest leader.

The likeliest coalition partner for his Austrian People’s Party is the right-wing, anti-immigration Freedom Party.

But he could also try to renew its alliance with the centre-left Social Democrats, who led the increasingly fractious outgoing administration.