To be so close, but yet so far…

Islam being the major roadblock in the road. 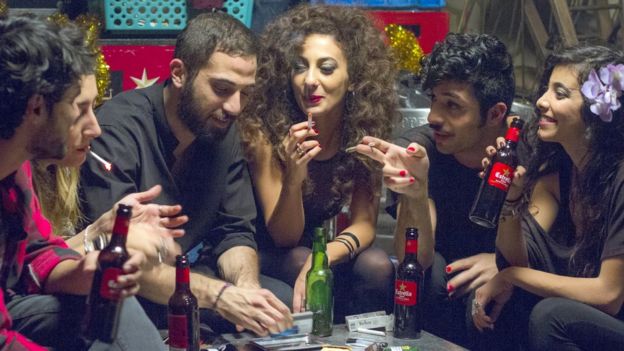 When 35-year-old Maysaloun Hamoud, a Palestinian director, said she wanted to “stir things up” with her movies – she achieved it.

Her first feature film, In Between, has resulted with her being issued with a fatwa (Islamic religious ruling), as well as death threats.

The movie, which is released in the UK this month, is about three young Arab women sharing an apartment in the Israeli city of Tel Aviv.

Away from the traditions of their families, they find themselves “in between” the free lives they’re aspiring to lead and the restrictions still imposed on them.

“It’s naive to say, ‘no I didn’t expect any comeback’ when I wrote it,” says Hamoud, “but I didn’t know how big it would be.

I knew when I started to write these characters that it could not be passed by, but I did not expect the extent of the reaction.”

Her characters are: Nour, who seems to be heading for a respectable marriage, but her fiance is exposed as a religious hypocrite; Salma, who dreams of being a DJ and is unable to tell her family she is gay; and Laila, a successful lawyer, who hopes for a partner who is as liberal and independent as her, and is disappointed.

The film is also set within the Palestinian underground scene (a group of young Palestinians living in Israel who are using music to forge a new cultural identity for themselves) and features an electronic soundtrack from local DJs.