My job ended today and went to the pit area. I was followed by a Somali driver, the same person who in earlier writings demanded that I drive with people in the aisle. He said that Somalis know what I look like and will attack me, that not one tooth will be left in my mouth! This is how the driver for Nobina Finland talks.

Here’s the video of the incident, I’ll capture it tomorrow and translate it and place it here.

‼️Finland: Somalians have only screenshots of ticket. When ask 4 tickets, swear by Allah that they have tickets. But do not want to show. pic.twitter.com/43VClbhCFr

07/13/2017
Earlier this week on social media there was a controversy over a Helsinki bus driver described in a video, of how a Somali boy tried to get on the bus without a ticket on the grounds that his cell phone battery had run out of power.

The driver refused to allow the boy access to the bus, after which the person in question made her complaint to Nobina, which served as the driver’s employer.

The driver has received threats after the event from his Somali colleagues and today, in addition, he was dismissed from work by Nobina.

A redundant bus driver says Gleb Simanov to Iltalehti that he had intended to raise the overall problem. 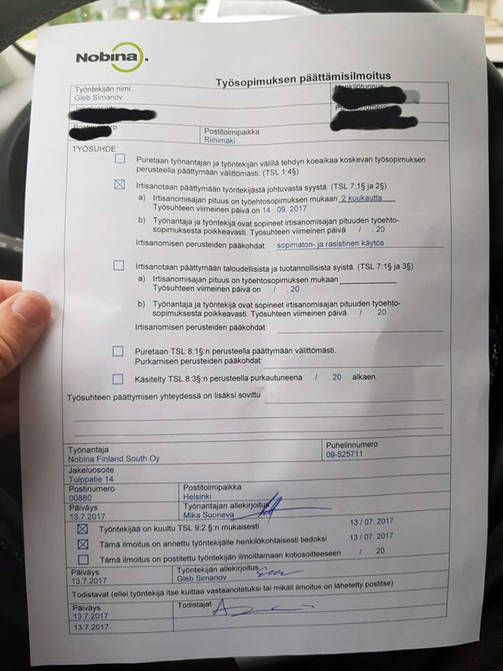 The operator, Nobina Finland, gave notice to the driver on Thursday, who filmed people trying to board the bus without a ticket.

The ending of the work contract was justified due to an “inappropriate and racist behavior”. Young people with an immigrant background were filmed, and the video circulated in social media with racist comments.

Simanov shared the videos on Monday on a Facebook page and received on Tuesday a request from his employer by telephone that fe remove the online videos .

– The employer said that by removing the videos I would be let off easier. I promised to remove videos by Tuesday evening, I couldn’t do it during working hours  while I was driving, Simanov tells Iltalehti.

He says he acted according to the wishes of the employer and removed the video immediately on Tuesday evening.

Simanov says that he was aware that the pit area must not be filmed, but he did not remember having heard of the ban on buses. He says he had intended to work continuously with videos to show the problems they encounter in order to develop the system.

– In our work we face issues like these problems on a daily basis, and no one wants to take it seriously. I never thought that by describing it , that it would harm the company, he says.

Although the videos increased to some degree a fuss, Simanov did not expect dismissal.

– In a way, it came as a surprise, as well as to my shop steward, who was involved in the discussions. He said that at the most, I should be given a warning, Simanov says.

Both Nobina and HSL emphasize that the terminating of the employment was generated by the transport operator, and HSL has had no role. According to Simanov  the dismissal came from “pressure by HSL”.