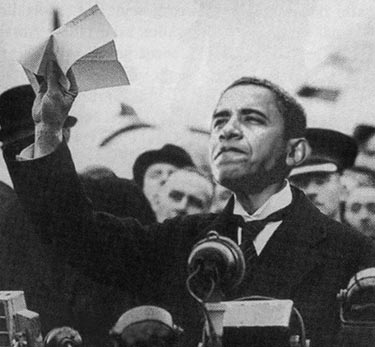 If Barack Obama Were President In 1941, Here’s The Watered Down Pearl Harbor Address He’d Give

IJR Opinion is an opinion platform and any opinions or information put forth by contributors are exclusive to them and do not represent the views of IJR.

For those familiar with Roosevelt’s incredible and moving speech, you will recognize its framework and wording in this piece.

As a veteran, I contemplated changing the date in the headline because of the sacredness of Dec. 7 to our nation. Yet, if changed, the result would not be as powerful. We are, in all seriousness, living under the rule of a delusional leader. In the words of Ecclesiastes 4:13, “Better a poor and wise youth than an old and foolish king who will be admonished no more.” Here’s a guess at how President Obama and his Secretary of State John Kerry, if they were in charge, would have delivered Roosevelt’s speech after Pearl Harbor:

To the Congress of the United States,

Yesterday, Dec. 7, 1941 – a date which will live in infamy – the United States of America was suddenly and deliberately attacked by radicals in naval vessels and aircraft owned by the Empire of Japan.

Indeed, one hour after these radical air squadrons had commenced bombing in Oahu, the Japanese ambassador to the United States and his colleagues delivered to the Secretary of State a formal reply to a recent American message. While this reply stated that it seemed useless to continue the existing diplomatic negotiations, it contained no threat or hint of war or armed attack. Thus, we believe there is no intent of war on the part of the good people of Japan, and we will continue with further peaceful negotiations.

It will be recorded that the distance of Hawaii from Japan does not necessarily make it obvious that the attack was deliberately planned many days or even weeks ago. During the intervening time, some have argued that the Japanese government has deliberately sought to deceive the United States by false statements and expressions of hope for continued peace. We will not succumb to such fears and we reject any narrative that would seek to demonize the Japanese people.

That said, it will be noted that the attack yesterday on the Hawaiian Islands has caused severe damage to American naval and military forces. Very many American lives have been lost. In addition, American ships have been reported torpedoed on the high seas between San Francisco and Honolulu.

Last night, the release of an anti-Asiatic video, resulted in a spontaneous attack on Guam.

Last night, a group, frustrated about the high rate of unemployment, attacked the Philippine Islands.

Last night, there was also an attack by multiple individuals on Wake Island.

As commander in chief of the Army and Navy, I have directed that all measures be taken to prevent any stereotyping against people of Japanese descent. That would not be the American way.

We will always remember the character of the onslaught against us, but we should also consider those we have slaughtered.  Lest we get on our high horse, we must remember that we are not immune to such violent actions.

I believe I interpret the will of the Congress (but even if I don’t, I’ll still do what I want) and of the people when I assert that we will not only continue our relations with the Empire of Japan, but we will make certain that this form of treachery shall never stop us from asserting that the Japanese are a peaceful people.

Hostilities exist. There is no blinking at the fact that our people, our territory and our interests are in grave danger. Thus, I have ordered our finest transgender special operations task force to deploy immediately.