H/T: Always Watching: ” There never thought of doing that when/still are Christians being slaughtered by the musulmaniacs……” 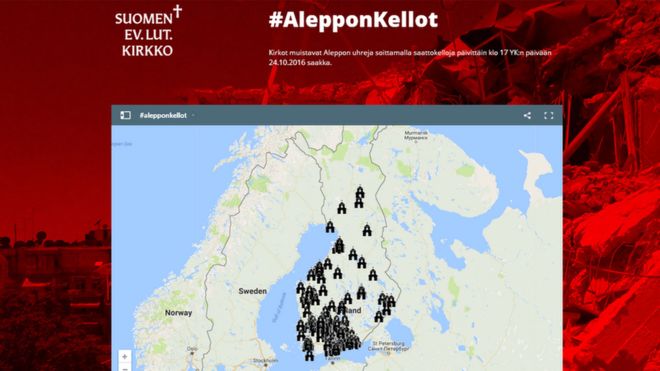 Image copyrightEVL.FI/GOOGLE MAPS
Image captionThe initiative has spread across Finland and aims to remind people “to respect and remember” those who have died in Aleppo, Dr Laajasalo says

Churches across Finland are tolling their bells once a day in tribute to victims of the bombardment of Aleppo.

The Evangelical Lutheran Church of Finland says more than 200 of its churches are now taking part in the initiative, which started on Wednesday. Their bells will ring at 5pm for 12 consecutive days in memory of those who have died in the Syrian city.

The idea originated at the Kallio church in Helsinki before spreading across the country, and to the Finnish Church in London. On Friday, Uppsala Cathedral in Sweden announced that it, too, would ring its bells in unison with churches in Finland.

“Funeral bells are tolled when the body is carried out of the church after the service. There is a war crime happening in Aleppo and endless funerals,” Dr Teemu Laajasalo, vicar of Kallio parish, tells Keskisuomalainen.