Yet another Nordic elitist showing contempt for the civil society.

She also loves sticking it to the Jews… 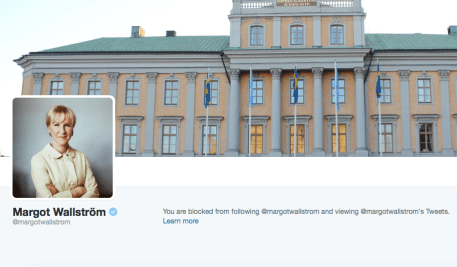 UN Security Council has before midnight unanimously adopted a French draft resolution gives the UN member countries the right to take “all necessary measures” to combat the so-called Islamic State, IS.The resolution calls on the UN’s 193 member countries to “strengthen and coordinate” their efforts to prevent and push back the terrorist attacks by groups linked to the IS, al-Qaida and other extremist groups. It is now very rare for them five permanent members of the UN Security Council, including the US and Russia manage to agree on resolutions of the Council.

Margot Wallström has clearly expressed its support for this, but when no press release can be found controlled Ledarsidorna.se Foreign Minister’s official Twitter account, linked from the government’s official website, to now be able to establish that the Swedish Foreign blocked Ledarsidorna.se.

A remarkable action to block a journalist with press credentials. Now, if the pressure switch to check that he can, it’s a he, with a slight advantage to control who has Union press card with number 325 0288 7716th Union is, at the side of Journalists, the only ones who can issue international press card in Sweden.

To block out the media, and citizens, the information is quite apart action of a democratically elected government.

The travesty can be to some advantage now applied to the Government in general and Foreign Minister Wallström in particular.