Many would agree that they should be taken to the coast line of Italy and be forced to ”swim for it” across the Med back to Libya.

Five men have been charged with multiple counts of murder by Italian authorities after survivors named them as the traffickers in charge of a vessel that capsized in the Mediterranean, killing an estimated 200 people.

According to witness accounts gathered by police, the suspected traffickers – two Libyans, two Algerians and a Tunisian aged 21 to 24 – threatened the migrants on board with knives and beat them with belts to control them.

About 100 African migrants now presumed dead were allegedly held in the hull of the doomed boat, survivors told police. The traffickers allegedly said those passengers, who had paid less for their crossing than others, could be kept there for three days. When the hull started filling with water, the traffickers beat them back and ordered other passengers to sit on the hatch of the hull to stop them getting out. 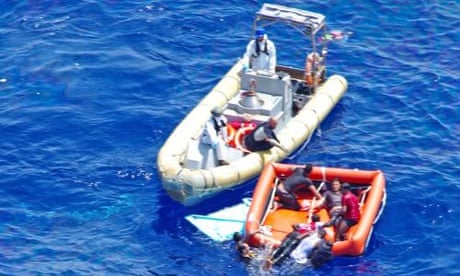 According to police, the suspects, thought to be part of a Libyan-based trafficking ring, used their knives to cut marks on the heads of migrants who disobeyed their orders – especially the sub-Saharan Africans – while Arabs were beaten with belts.