Cotton badgered Kerry as to why the contents of the side agreements cannot be made known to the American people, despite the Iranians knowing the content of the agreements. Cotton wanted Kerry to answer why this agreement was classified and kept from the American public.

Kerry’s response was, “because we respect the process of the IAEA and we don’t have their authorization to reveal what is a confidential agreement.” Respect for another party can be admirable. However, according to Cotton: “But U.S. law requires any deal, between  any party, not just the United States, be submitted to Congress before the 60 day clock begins to tick.” Bibi on Iran Deal: ‘We Aren’t Partners at the Table, We Are a Meal on the Menu’ [VIDEO]

Kerry skips Israel on his Mideast trip, but is grilled for keeping secret side agreements between Iran and the IAEA from the American public.
By: Lori Lowenthal Marcus
Published: July 30th, 2015 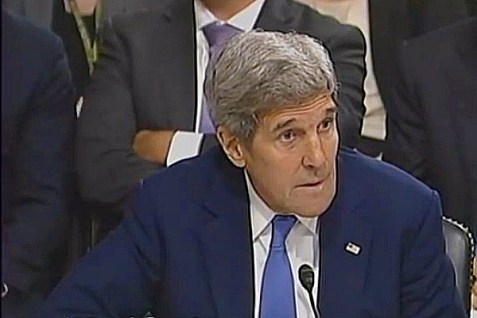 Israeli Prime Minister Benjamin Netanyahu learned that U.S. Secretary of State will be making a trip to the Middle East to sell the Iran deal, but is skipping Israel.

Kerry will be visiting Egypt and Qatar and other Gulf State representatives, but won’t stop in the Jewish State, which until recently was considered America’s closest ally in the Middle East.

The Prime Minister’s response to the snub was, “Really, Kerry has no reason to come here.”

Expanding upon that response, Netanyahu said of the Iran deal, “This deal has nothing to do with us. We are not influenced by this deal at all. We aren’t partners at the table, we are a meal on the menu.”

These comments were made to reporters on Tuesday, July 28, during a return flight to Israel from Cyprus, as reported by Israel Hayom.

It isn’t only America’s erstwhile BFF Israel that is expressing dismay at the nuclear deal concluded by the U.S., along with its other P5+1 partners, and Iran. Appearing before the House Foreign Relations Committee on Tuesday, Kerry and other deal cheerleaders were grilled on the likelihood of Iran honoring the commitments under the deal.

“Iran has cheated on every agreement they’ve signed,” Rep. Ed Royce (R), chairman of the committee said. Royc continued, asking whether Iran “has earned the right to be trusted.”

Kerry responded that “nothing in this deal is built on trust. Nothing.”

Listen to this jackass spin and twist to straight questioning.