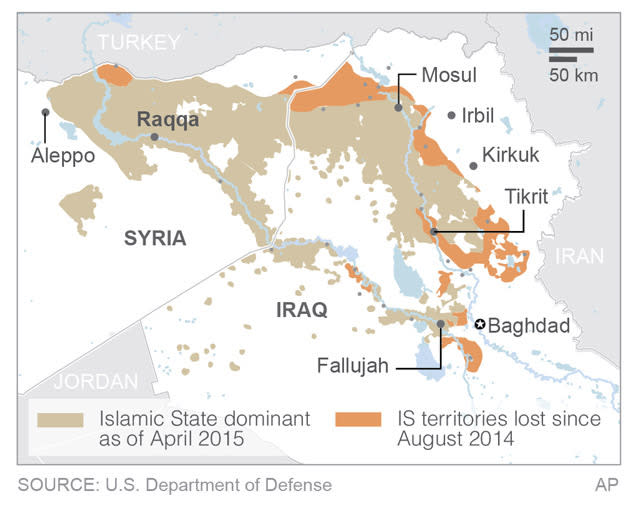 WASHINGTON (AP) — Islamic State militants have lost control of up to 6,500 square miles (16,800 sq. kilometers) in Iraq but have gained a bit of ground in Syria since last August, the Pentagon said Monday.

Army Col. Steve Warren, a Pentagon spokesman, said the front lines of the territory held by the Islamic State group have been pushed farther south and west in Iraq. But the militants still control a wide swath of land stretching from west and south of Sinjar down through Mosul and across Bayji, including the oil refinery there, which is still contested.

A new map released by the Pentagon shows that U.S. and coalition forces regained key territory near Tikrit, Sinjar Mountain and Mosul Dam.

U.S. administration officials have said that coalition airstrikes and the ground campaign being waged by Iraqi forces have led to the gains, particularly lately around Tikrit. But Warren said it is too early to say whether the tide of battle has turned.