This article by Dr.Gerstenfeld was published today at Israel National News, and republished here with the author’s consent. 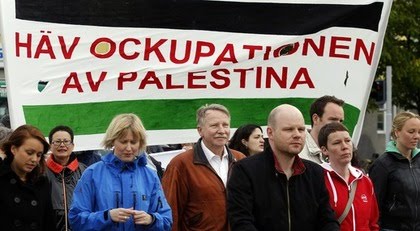 Last month the Swedish foreign minister Margot Wahlstrom postponed her visit to Israel after foreign Minister Avigdor Lieberman and other Israeli top officials refused to meet her.1 The Israeli refusal was a reaction to the new Social Democrat Swedish government’s initiative to recognize the Palestinian state shortly after its arrival to power. The Israeli attitude should also be seen, however, against the background of decades of extreme anti-Israeli hatemongering by Swedish Social Democrats.

The late Swedish Social Democrat Prime Minister Olof Palme – murdered in 1986 – was a pioneer of anti-Israel incitement. He accused Israel of Nazi practices.2 In 1984, Swedish Deputy Foreign Minister Pierre Schori visited Israel. He praised Arafat and his “flexible policy.” In an article, Schori claimed that “the terrorist acts of the PLO were ‘meaningless,’ while Israel’s retaliatory acts were ‘despicable acts of terrorism.’”3 Surprisingly, this century started, however, with a very positive event for the Jewish people in Sweden. In January 2000, a major conference on Holocaust education in Stockholm came to a close. The Stockholm International Forum on the Holocaust had been initiated by Göran Persson, then the Swedish Social Democrat prime minister. Political leaders from almost fifty countries participated in the conference. Nowadays representatives of tens of countries meet regularly to discuss Holocaust education, research and remembrance in the framework of an intergovernmental organization, the International Holocaust Remembrance Alliance.4 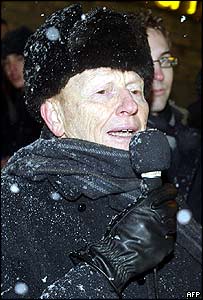 Yet Zvi Mazel, who was Israel’s ambassador to Stockholm from December 2002 to April 2004, said, “Despite Persson’s personal attitude, he has to carry part of the blame for his party’s discriminatory stance toward Israel. For decades, the Social Democrats helped create the country’s anti-Israeli atmosphere. He also has to take responsibility for the behavior of the Swedish International Development Corporation Agency (SIDA), which blames Israel for all the many wrongs in Palestinian society.”

Mazel added, “Another leading socialist, the late foreign minister Anna Lindh, usually made the most vicious attacks on Israel. Her hatred of Israel can only be described as almost pathological. Under her leadership, Sweden published the greatest number of one-sided condemnations of Israel of any EU country. Lindh was stabbed to death in 2003 by a mentally disturbed Swede of Serbian origin.”5

Lindh’s successor as foreign minister, Laila Freivalds, visited Yad Vashem in June 2004 to honor murdered Jews. She then heavily criticized Israel at a meeting with the Israeli Ministry of Foreign Affairs. Freivalds remained silent on the extensive anti-Semitism in Sweden, much of which is of Muslim origin. This phenomenon of paying honor to dead Jews, criticizing Israel, and ignoring or belittling one’s own country’s major delinquencies toward living Jews is common in Europe. Freivalds’s behavior was subsequently exposed by four former chairmen of the Swedish Jewish community, who wrote about the rampant racism and anti-Semitism in the country.

They sent a letter to the editor of Haaretz in which they summarized contemporary Swedish anti-Semitism. The letter first praised Sweden for having received Jews fleeing the Holocaust during World War II, and Prime Minister Göran Persson for initiating the Living History Project.

The four then went on to say:

The number of verbal and physical attacks against Jews has increased in Sweden. Youngsters in schools give evidence of how they hide the fact of being Jews, as they are attacked both verbally and physically. Teachers testify that students refuse to participate in classes when Judaism is studied. Survivors report feelings of fear. The police stand passively by when extremists attack pro-Israel and anti-racist manifestations.

Over the last decades, Sweden has become a center of racist and anti-Semitic White Power music, and several anti-Semitic groups have established Swedish websites spreading anti-Semitic propaganda. The Swedish Church has just recently initiated a boycott campaign [against Israel], a reminder of the commercial boycott of Jews in various societies in the past.6

There were large anti-Israeli demonstrations in Sweden during Israel’s Operation Cast Lead in 2009. Prominent members of the Social Democrats – at the time the party was in opposition — took part in hate demonstrations against Israel. Mona Sahlin, then the party’s leader, participated in a rally in Stockholm7 where Hezbollah and Hamas flags were flown and an Israeli flag was burned.8 Jan Eliasson, the former foreign minister,9 and Wanja Lundby Wedin, chair of the Swedish Trade Union Confederation,10 also took part in that event. 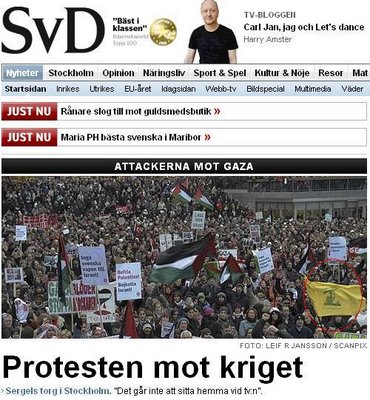 Sweden’s third largest city, Malmö, is often mentioned as the capital of European anti-Semitism. The perpetrators of the many anti-Semitic acts committed there are mostly Muslims. Hannah Rosenthal, the U.S. government’s special envoy for combating anti-Semitism, visited the town in 2012. She spoke out about anti-Semitic statements made by then Social Democrat Mayor Ilmar Reepalu. Rosenthal also remarked that under this mayor Malmö had become a “prime example” of “new anti-Semitism,” as anti-Israeli sentiment serves as a guise for Jew-hatred.11 A record number of complaints about hate crimes in the city from 2010 through 2011 did not lead to any convictions.12 It is thus not surprising that the major 2013 study by the European Union Agency for Fundamental Rights found that 51% of Swedish Jews considered hostility to Jews in the streets and public spaces to be a fairly large or very large problem. Thirty-four percent of Swedish Jews always avoid wearing, carrying, or displaying things that might help identify them as Jews in public places; another 26% avoid doing this frequently. These are the highest figures for any country covered by the study. Twenty-two percent feel that they are constantly being accused or blamed for what Israel does; 27% said that this occurs frequently. Twenty-five percent say that anti-Semitism is a major problem.13

The Swedish Social Democrats are far from the only example of how European socialists have become indirect allies of the Islamo-Nazis of Hamas. They are, however certainly one of the most pronounced ones.