Islam 101 budding in prior seat of the Islamic caliphate.

Clash of the potentates on who will eventually assume full control of the caliphate. Seeing that Erdogan has US made weaponry, but bet is on Turkey. 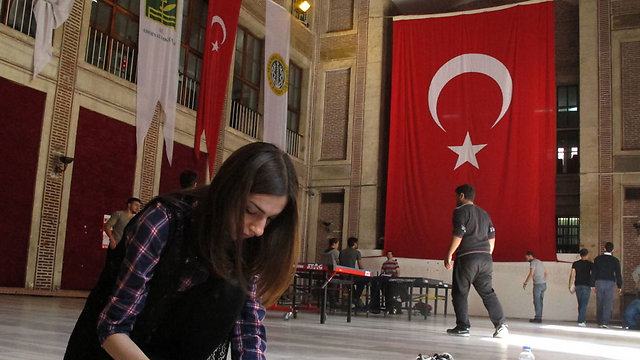 Istanbul University student Aysegul Korkut is outraged by the images coming out of Syria. But these days the Islamic State group’s horrors seem closer to home: She recently faced off against masked supporters of the brutal militants on her own campus.

“I couldn’t understand what was happening at first,” the 21-year-old said of the moment she first spotted baton-wielding youths striding across the Department of Literature, shouting: “Allahu Akbar!” Within minutes, she and other leftist students had been sucked into a fight, with both sides hurling glass bottles at each other and trashing a science fair set up in the main hall.

The Sept. 26 clash, described to The Associated Press by Korkut and a half a dozen other university students, was the first in a series of fights at Istanbul University’s Beyazit campus. There has been repeated violence since, and Turkish media have reported scores of arrests. On Monday alone 42 students were detained when police broke up a fight in a courtyard adjoining the department, the state-run Anadolou Agency reported. Several sticks — and a meat cleaver — were recovered from the scene.

Police and university officials did not return messages seeking comment.

The fights are one of many signs of support for the Islamic State which have popped up across Istanbul, a cosmopolitan metropolis better known to tourists for its vibrant nightlife and Ottoman-era glories.