But first a word from Vlad:

(This one actually angers me a bit. The BBC had to walk down a labyrinth of lies to fabricate this attempt to extricate Islam from this scandal. The reason that one is discouraged, as the BBC put it, from saying adopted children as your own, which is a fanatically polite way of saying that adoption is discouraged, is because the pirate Mohamed wanted to have sex with his adopted son’s wife after he saw her getting changed one night when he was peeping on her. When his followers mentioned to him that he had specifically said that allah had commanded that you couldn’t have sex with family member’s wives etc. his strategy, after consulting allah of course, was to say that he had been commanded to end the practice of adoption so his son’s wife wasn’t really out of bounds for him. Just think of all the suffering of orphans though out the ages because of this one selfish act of a filthy little peeping Tom who wanted to get it on with his own adopted son’s wife) 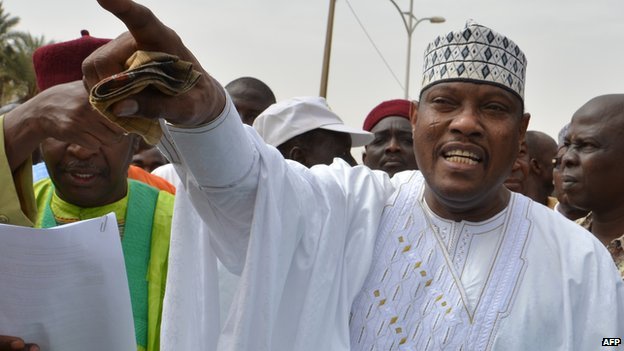 Parliamentary speaker Hama Amadou, whose wife was arrested in June, has fled to Burkina Faso

The speaker of Niger’s parliament has fled the country after a parliamentary committee agreed he could be arrested over a baby-trafficking scandal.

Hama Amadou, considered a presidential contender in 2016, says the allegations are politically motivated.

His second wife and 16 other people were arrested in June accused of illegally buying new-borns from “baby factories” in south-eastern Nigeria.

All of those accused have denied any wrong-doing.

The babies are allegedly sold for thousands of dollars each.

The BBC’s Niger correspondent Baro Arzika says the case has proved fortuitous for President Mahamadou Issoufou’s party which has been looking for ways to remove Mr Amadou as speaker since he fell out with the ruling coalition.

The scandal has also shocked many in the predominantly Muslim country as it is seen as unIslamic to pass off adopted children as your own, our reporter says.

It has been reported that some of the women claimed to be pregnant and went to Nigeria before returning with their babies, he says.

The National Assembly’s top committee, which includes deputy speakers and the heads of parliamentary committees, met on Wednesday and agreed that police could arrest and question Mr Amadou over the allegations.

Six opposition members refused to attend, but enough were present to take the decision.

“It is not with a light heart that we have decided this. But the government has itself handed over one of its ministers this weekend,” Reuters news agency quotes the deputy parliamentary chief Daouda Malam Barte as saying.

He was referring to Abdou Labo, who has been sacked as agriculture minister and arrested on Saturday in connection with the scandal. After he was dismissed he lost his immunity from prosecution as he is not an MP.