All non-Muslims are targets.

I haven’t even heard of sunni rape gangs targeting shiia Muslim girls, and we all know the ‘love affair’ between these two groups.

In India, the common Muslim practice is to kidnap young Hindu women, forcibly convert them to Islam, and then marry them (or turn them into sexual slaves). The process is known as the “Love Jihad”, and it bears a strong resemblance to the “grooming and pimping” epidemic in the UK.

An Indian commenter named Yog left some useful information about the Love Jihad in the comments on Tuesday’s news feed. The post below is adapted from his comment. 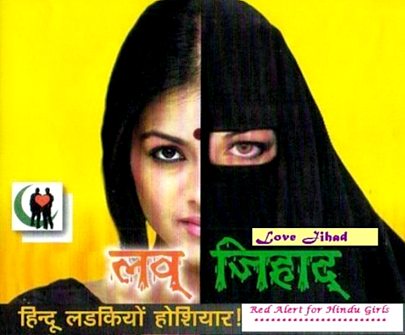 There are many many good reports on this phenomenon, but nearly all in Hindi (and many are documentary shows running one to two hours long, but all of those are in Hindi). The problem is that English language media in India is controlled by a small number of powerful groups, and ALL of them are left-secular leaning. In India that means whitewashing any crime done by Islam (be it historical, or more current). You could say that is one of the top planks on which the left-secular movement stands. So they simply deny or play down any instances of “Love Jihad” — this being the name given to it by Hindu organizations.

Here is a website with links, not very good (go to parent of this URL for more links).

Here are statistics confirmed by police investigations. In the states of Kerala (Muslim population 30%) and Karnataka, over 3000 Hindu and Christian girls have gone missing over the past three years. Some are never found again. Some resurface as Muslims.

Usually the girl goes missing. A few months later, her parents receive a letter (with picture of her) saying, “I have converted to Islam. Don’t look for me anymore.” In many cases, the girls are used in the terrorism pipeline, as couriers etc. Some end up as sexual slaves for Jihadi warriors.