Like drunks looking for their keys by the lamppost.

It’s Another “Death to the Jews” Weekend

From Berkeley to Boston and from Paris to Sydney, the season is upon us again. Hipsters twirl  Keffiyahs from some Shanghai factory around their necks, don army surplus jackets and Decembrist t-shirts and head to the nearest Israeli embassy to scream about a new Holocaust. 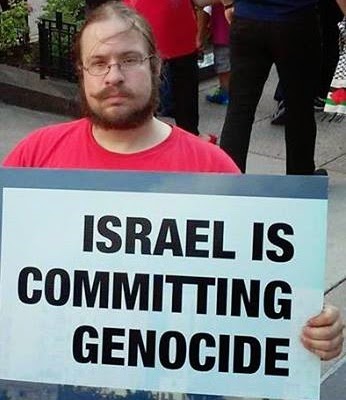 Shiites and Sunnis temporarily put aside their blood feuds and entire families of Syrian Alawites and
Turkish Sunnis stand in London or Berlin screaming “Death to the Jews”.

Joining them are elderly Trotskyists and aging Stalinists, normally as mutually hostile as Shiites and Sunnis, who put aside their differences to feebly wave cardboard signs about the Zionist war machine.

Fake blood is everywhere. Aspiring art students who can’t draw try to figure out new ways of intersecting a Swastika and a Star of David. Latuff cartoons are printed out along with bloody photos  of dead people from Syria, Hollywood horror movies and on the rare occasion, Gaza, and shoved in everyone’s faces.

The organizers take a break from submitting angry Truth Dig articles about Brazilian cocoa exploitation and dive headfirst into a rally that, unlike all their other rallies, the media will actually cover. They prowl the police barriers like hungry hyenas looking for a reporter.

On the last few struggling Pacifica affiliates, Amy Goodman invites Noam Chomsky to talk about the war. Chris Hedges phones in to promote his new book, which is only 90 percent plagiarized from a Hemingway novel he thought he once read. Max Blumenthal shows up to lead a Students for Justice in Palestine protest while shouting about colonialism. Then he tags himself on Instagram.

At the Israeli embassy, the hipsters imagine that they’re guerrilla fighters. They scream themselves hoarse about oppression, duck into a Starbucks, come out with a few cinnamon lattes and then begin screaming again. Recruiters for the International Socialist Organization, the World Revolutionary Front, the International Workers Fourth Front Uprising and the always popular Brotherhood of Revolutionary Workers and Peasants push smeared pamphlets into their pockets hoping for a bite.

Joseph Massad mounts the stage to explain that Zionism is the real Anti-Semitism. Muslims in the crowd begin chanting that Mohammed’s army is coming back. “O Jews, O Jews,” they scream. Rage Boy is somewhere among them. They are all Rage Boy now.

An old Trotskyist waves a sign quoting Marx’s slur that the god of the Jews is money. But he changed it to Zionists so it’s not anti-Semitic anymore.