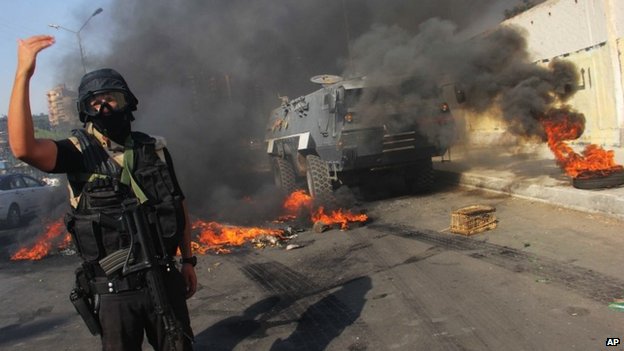 Gunmen have killed at least 20 soldiers in an attack on a checkpoint in western Egypt, security officials say.

The attackers used grenade launchers and heavy machine guns when they attacked the desert post some 390 miles (630km) west of Cairo, officials said.

It is not yet clear who carried out the assault.

Militants have intensified a campaign against the security forces since the Islamist President Mohammed Morsi was ousted from power just over a year ago.

The country’s presidency has declared three days of mourning, saying: “Terrorism will be uprooted from every part of Egypt.”

The Syrian Observatory for Human Rights described Thursday’s takeover of the Shaar field as “the biggest” anti-regime operation by the Islamic State (IS) since it emerged in the Syrian conflict last year.

The watchdog, updating an earlier toll of 115, said it had documented “the death of 270 people killed in the fighting or executed” since Thursday.

“A large majority of the men killed were executed at gunpoint after being taken prisoner following the takeover of the camp,” said Observatory director Rami Abdel Rahman.

PESHAWAR, Pakistan — Fifteen militants were killed early Saturday morning when an American drone struck a compound in the Pakistani tribal region of North Waziristan, according to local residents and a security official. It was the fourth known drone strike in the region since Pakistan launched a military operation there last month.

Residents said the drone fired four missiles into the compound about 2 a.m. They said that 10 of the militants killed were from Punjab, Pakistan’s largest province, and that the five others were Uzbeks affiliated with the Islamic Movement of Uzbekistan. The strike occurred in the village of Datta Khel, a few miles from the Afghan border.

A security official gave a slightly different account, saying that six missiles had been fired at the compound, and that two vehicles loaded with explosives had been struck. “There are tents and there are mud houses, occupied by militants fleeing Miram Shah and Mir Ali,” the official said, describing the compound and referring to two nearby towns that have been hubs of jihadist activity. The army says it has cleared Miram Shah of militants, and a ground offensive is continuing in Mir Ali.

Aden (AFP) – Gunmen have killed two Yemeni police in an attack on a camp for anti-riot forces in the central province of Baida, an Al-Qaeda stronghold, an official said Thursday.

The assailants on board two vehicles fired machineguns at the camp in the town of Rada late on Wednesday, and on-duty policemen shot back at them, said the regional government official.

“Two policemen were killed and a third was wounded” in the clash, he said, adding the assailants fled after failing to storm the camp.

The official was unable to say if there were any casualties among the attackers.

Separately, the official said the authorities still had “no news of two policemen kidnapped two days ago in Baida,” the provincial capital.

In January 2012, hundreds of extremists briefly took over Rada before withdrawing under pressure from powerful tribal leaders.

Al-Qaeda in the Arabian Peninsula, or AQAP, is active across several parts of Yemen and has taken advantage of a collapse of central authority during a 2011 uprising that ousted veteran president Ali Abdullah Saleh.

Supporters of militiaman Hussam al-Sabbagh – one of those who orchestrated clashes related to the Syrian war – took to the streets and blocked road in Tripoli as the Lebanese Army worked on clearing the streets and restoring calm, the sources said.

The army blocked the road near the Abu Ali roundabout over fears of sniper fire from Bab al-Tabbaneh, where around 150 men brandished their weapons again and deployed heavily inside the impoverished neighborhood that has long served as Sabbagh’s main quarters, the sources added.

The eventful night also witnessed the killing of suspected terrorist Monzer al-Hassan, accused of providing a terror cell with explosives, during a raid of his apartment at 1 a.m. in the posh City Complex building in Tripoli.