As long as those he helps recruit end up ”over there” and like himself.

Mr. Poulin learned how to build explosives online and considered becoming an anarchist or a Communist, before converting to Islam. 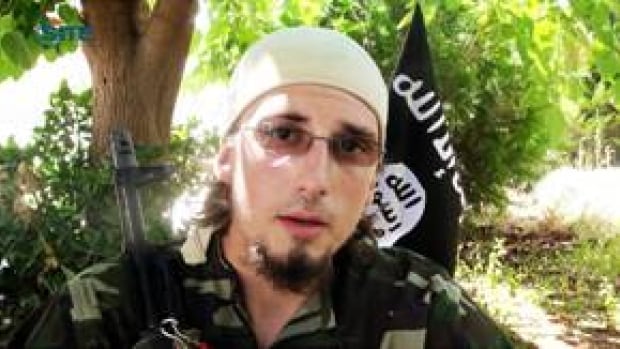 Canadian Killed in Syria Lives On as Pitchman for Jihadis

WASHINGTON — Shortly after the video begins, a man in his 20s dressed in camouflage appears on screen and begins a recruitment speech.

His pitch is fairly straightforward: Come join the fight — you don’t need to be a radical to be a jihadi.

He says he was just a normal teenager growing up in Canada, fishing and watching hockey, before he left it all for the battlefields of Syria.

But while the young man in the video, Andre Poulin, cast himself as just a typical Canadian, the authorities there say he lived a far different life from the one he described. In his late teens and early 20s, according to a Canadian prosecutor, Mr. Poulin learned how to build explosives online and considered becoming an anarchist or a Communist, before converting to Islam.

And the video goes on to show where his beliefs ultimately led.

After Mr. Poulin — later known as Abu Muslim — finishes his monologue, he is seen running through a field in Syria during a siege of an airport, then dying in the battle. A graphic picture of his corpse is shown, and he is hailed as a martyr. He was likely 24 at the time of his death last year.

The video is believed to be one of the first pieces of media in which the Islamic State in Iraq and Syria — or ISIS, the group that controls large parts of both countries — used an English-speaking North American to try to lure others to fight on its side. It was distributed recently by a propaganda arm of ISIS, known for having one of the slickest and most aggressive media operations in the Islamic world, according to experts who track jihadist materials.