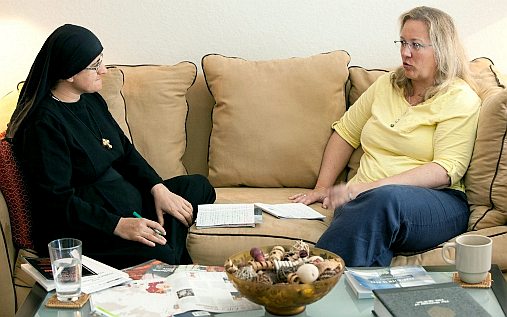 Sister Hatune Dogan is a Syrian Orthodox nun. She was born in Turkey, but her family fled to Germany to escape persecution. She now works in the field to help persecuted Christians all over the world, especially in the Middle East.

Sister Hatune was one of the featured speakers at the “Solidarity for Persecuted Christians” events in Orlando last month. On May 17, 2014 she was interviewed by Elisabeth Sabaditsch-Wolff.

NOTE: Sister Hatune’s English is not as good as her German, so we made the effort to transcribe the speech, normalize the English syntax, and then subtitle it. This also make it easy to provide SRT files for people who want to translate it for their own subtitles in other languages. When making small changes — verb tenses, plurals, grammar, prepositions, and so on — I didn’t indicate my revisions in the transcript. However, when the difference was significant I put the alternate word or phrase in square brackets, so that viewers can see where I made the change.

Transcript at Gates of Vienna.