How much you want to bet that this guy’s feet will soon be blistering and swollen after the caning he most likely to receive. Or worse.

I have a better solution for the smooch stone (kaaba): 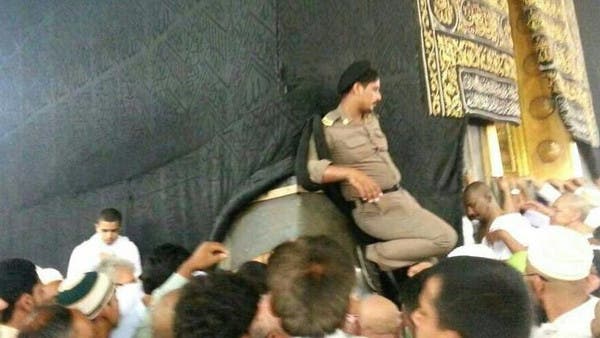 The Kaaba is at the center of Islam’s most sacred mosque, al-Masjid al-Haram, in Makkah. (Twitter)
By Staff writer | Al Arabiya News  Wednesday, 28 May 2014

A picture of a Saudi policeman leaning on Makkah’s sacred Kaaba with his shoes against the wall has prompted media outrage on Wednesday.

Makkah governor, Prince Mishal Bin Abdullah Bin Abdul Aziz, has ordered an investigation into the incident, saying such an attitude would not be tolerated.

Prince Mishal also called for disciplinary action against the policeman for failing to live up to the privilege and honor of serving in such a holy place.

Saudi newspapers reported the news, expressing shock at the image, while on social media, reactions to the picture varied.

Reactions ranged from “gentle understanding of his condition after hours of confronting challenges to outright condemnation for not respecting the sanctity of the place,” according to Gulf News.

Displaying the sole of one’s foot or touching someone, or something sacred, with a shoe or with feet is considered highly offensive in the Arab culture.

The Kaaba is at the center of Islam’s most sacred mosque, al-Masjid al-Haram, in Makkah.