Of course The Economist had to issue the standard bla bla bla mantra:

”The main obstacle for ISIS is that its ideology is not shared by the majority of Muslims in Syria and beyond.”

While many Muslims might not approve of the methods employed, the majority however, approve of what the methods might bring, the caliphate and full blown sharia law.

What ISIS, an al-Qaeda affiliate in Syria, really wants 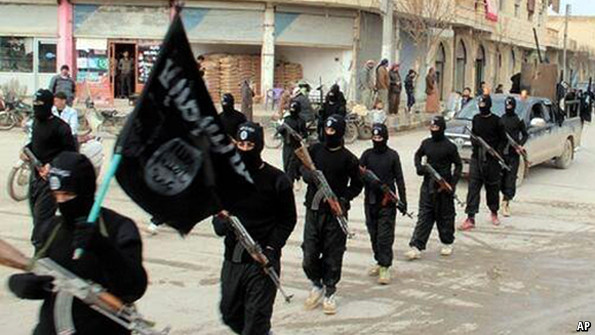 ON JANUARY 22nd representatives of the Syrian regime and political opposition are due to meet in Switzerland at a conference known as Geneva 2. The aim of the UN-brokered meeting is to agree on measures including a ceasefire, prisoner release and transitional government, with the hope of ending the war that has left over 100,000 dead. Arguments over who else should attend—the UN invited and then de-invited Iran, following protests from America and the Syrian opposition—have threatened to derail the talks. Even if they do go ahead, they will be complicated by the wide range of rebel groups currently fighting in Syria. Among the most prominent is the Islamic State of Iraq and al-Sham (Greater Syria), commonly known as ISIS. What does it want?

ISIS originated as an al-Qaeda offshoot in Iraq. Composed of fundamentalist Sunni Muslims, the group targeted the Iraqi government and American forces in Iraq, as well as Shia Muslims and Christians (both of whom it considers heretics) and killed civilians of all faiths in indiscriminate attacks. It expanded into Syria when that country’s uprising turned into a war between President Bashar Assad (who is backed by Iran’s Shia leadership) and the rebels he had tried to crush. One of the best-equipped and funded militias on the ground—although its sources of cash are murky—ISIS took control of the eastern rebel-held city of Raqqa in 2012 and expanded along the border with Turkey. Foreign fighters flocked to Syria to join it.

As ISIS’s name suggests, the interests of the group and its current leader Abu Bakr al-Baghdadi go beyond Syria. Its members believe that the world’s Muslims should live under one Islamic state ruled by sharia law. War and instability in Syria and Iraq have given it an opportunity to attempt to build a proto-state in the adjacent Sunni-majority areas of these two countries, before spreading further. Its 7,000 or so fighters in Syria have expended as much energy on consolidating the group’s rule in towns and cities behind rebel lines as fighting the regime. ISIS is willing to use ruthless tactics to assert its authority. Once in control of an area it has told women to cover up and kidnapped journalists, aid workers and Syrian activists. Beheadings and suicide bombings are now a regular feature of the Syrian war.

ISIS has complicated the conflict and international policy towards it. It has bolstered Mr Assad’s originally false claims to be fighting extremists. Western governments have become doubly wary of arming rebel groups, lest weapons fall into ISIS’s hands. Over the years, even al-Qaeda’s leadership has found some of the group’s methods too extreme. Ordinary Syrians say they have not fought for three years against Mr Assad only to be controlled by other autocrats. Matters came to a head last month when rebel groups which had hitherto tried to keep the peace fought ISIS; protests against the group had already occurred in many towns. The main obstacle for ISIS is that its ideology is not shared by the majority of Muslims in Syria and beyond.