“Europe is now in the grip of fanatics,” said the MEP. “I don’t just want Britain out of the EU, I want the rest of Europe out of the EU.”

UKIP leader Nigel Farage packs them in at Suffolk meeting 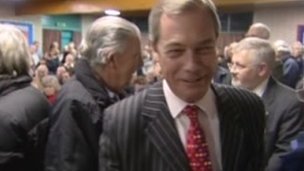 There can’t be many senior politicians who are able to pack a hall on a freezing, snowy night and then, when the meeting’s over, roll into the local pub and hold fort at the bar for the next hour and a half.

It was standing room only at the Brandon Community Hall in Suffolk. More than 300 people crammed into the room. Another 20 or 30 people stood in the corridor straining to listen and the police were called to direct the traffic.

“I thought UKIP was only for eccentrics, fruitcakes and gadflies, so I’m glad so many of you are members of the club,” joked Mr Farage, referring to a comment by Prime Minister David Cameron, while pushing his way to the front.

Mr Farage is not going to let that one go in a hurry and Mr Cameron’s words must be ringing in his ears when an events like this attract so much attention.

“The fact that there are so many of you here shows that there’s a change going on.”

The UKIP leader believes that the Westminster parties have lost touch with the concerns and aspirations of ordinary people and he thinks UKIP can fill the gap.

“We’re plain spoken, we’re not bound by political correctness and we’re talking about the kind of things that people are talking about around their dining room tables,” he told us later.