This dispels the nonsense espoused by some who claim that there’s no evidence of Hezbollah terrorists fighting inside Syria. Yes there is.

FSA: 38 Hezbollah fighters killed in Syria to be buried secretly in Lebanon 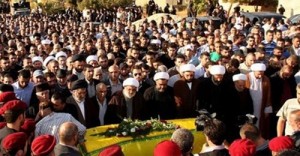 Al-Joumhouria newspaper quoted the joint military command of the Free Syrian army as saying that the bodies of 38 Hezbollah fighters that were killed inside the Syrian territory have been sent to Lebanon to be buried secretly in in various villages .

“Most of them were killed in the Reef of Homs while four fighters were killed in Damascus,” the media head of the Free Syrian Army Fahed al-Masri revealed.

“The corpses were transferred secretly to Lebanon and arrangements for the burial were being made after buying the silence of the deceased’s relatives,” the newspaper reported.

It was hard to identify 10 corpses as a result of severe burns and injures, it added.

Hezbollah has in recent months allegedly buried a number of fighters killed in Syria, without publicly disclosing how the men were killed, or where.

On Sunday, a Hezbollah member that was killed while fighting in Syria was buried in southern Lebanon, several residents of the man’s village told AFP.