Ban Ki-Moon was just sitting with the Turkish PM in, Vienna Austria, a couple of hours ago at the UN Alliance of Civilizations, talking about the horrors of the Assad regime, yet he has nothing to say about Syria getting a high profile post at the UN. 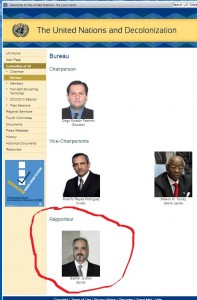 GENEVA, February 26, 2013 – UN Watch today called on Ban Ki-moon, US Ambassador Susan Rice and EU representatives to condemn the world body’s “revolting and absurd” decision to unanimously re-elect the Assad regime to a senior post on a decolonization committee charged with upholding fundamental human rights in opposing the “subjugation, domination and exploitation” of peoples — a propaganda victory now being trumpeted by Syria’s state-funded SANA news agency.

“It is incomprehensible for the UN to say that Syria has killed at least 70,000 of its own people and to then hand this gift of false legitimacy to the mass murderer Bashar al-Assad,” said Hillel Neuer, director of the Geneva-based human rights group UN Watch.

“The UN is helping the Assad regime portray itself a U.N. human rights arbiter. That’s indefensible, and an insult to Syria’s victims,” said Neuer. 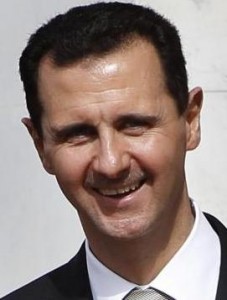 “Morally, Mr. Ban should absolutely have condemned this immoral decision when he was at the meeting. But it’s better late than never.”

The committee is mandated to implement the UN’s 1961 Declaration on the Granting of Independence of Colonial Countries and Peoples.

In November 2011, the UN also unanimously elected Syria to two UNESCO human rights committees. The Assad regime remains a full member “and no one at UNESCO seems to care the slighest bit,” said Neuer.