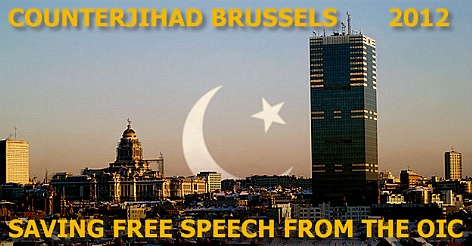 Tell me again about Europe and her pains,
Who’s tortured by the drought, who by the rains.
Glut me with floods where only the swine can row
Who cuts his throat and let him count his gains.
It seemed the best thing to be up and go.

The first leg of my flight to Europe last week was a short hop from Dulles to Philadelphia, where I had to endure a five-hour layover before continuing on to Brussels.

Despite all their glitz and hype, airports are not much fun to hang out in for any extended period of time, and Philly is no exception. You can walk for miles through the terminals searching in vain for something interesting to do. You can look at the duty-free booze, or shop for expensive jewelry, or buy a football jersey, or squint at the cover of Rolling Stone in Hudson News, or partake of high-carb delicacies in “Breads ’n’ More”, the generic airport eatery.

I was fortunate enough to find a decent restaurant, one where I could actually sit down and order good food from a waitress. I told the hostess as she ushered me to my table that I was in for a five-hour layover, and she asked me where I was heading.

“Belgium,” I said. “Actually, it’s the capital of Belgium.”

I wanted to add that it was also the capital of the European Union, but I had a premonition that she would also never have heard of the EU, and I really didn’t want to discover such an appalling fact about this well-dressed, well-spoken young lady. Whether in her ignorance she is representative of her larger American cohort I cannot say.

I had the good fortune to spend three full days in Brussels. The first one, Saturday July 7, was what I call “jet lag day”, a 24-hour period of disorientation and stupor during which normal functioning tends to be difficult. 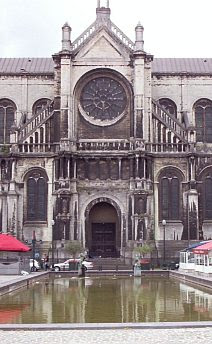 By Sunday July 8 I was ready for action again. Most of our leadership group was staying in hotels near St. Catherine’s Church, which is not as much of a tourist zone as the area around the Great Market.

The Brussels conference was the following day, so the leadership group — actually a variety of leaders from overlapping Counterjihad networks across Europe — took the opportunity presented by their early arrival, and convened informally that afternoon and evening in various watering holes near St. Catherine’s to discuss issues of common interest to the anti-sharia resistance.

Since most of the people there were involved in the following day’s conference in the European Parliament, much of the talk revolved around the planning for that event.

There were, however, other topics on the agenda. They included:

The more general discussion focused on the crackdowns against free speech that are now underway in most European countries. I was already familiar with oppressive conditions in Sweden, Norway, Finland, and Britain, but had not realized how dire the situation is in France, and — to a somewhat lesser extent — in Germany and Switzerland.

When we convened in Brussels five years ago, there had been virtually no prosecutions of Islam-critics in Europe. Since then there have been dozens, and possibly even hundreds, if all the “religiously aggravated public order offences” in Britain are taken into account. The repression is huge, it is ongoing, and it is accelerating.

On that ominous note, we adjourned for the night. The next day we were to take up the same themes in more detail at the European Parliament. 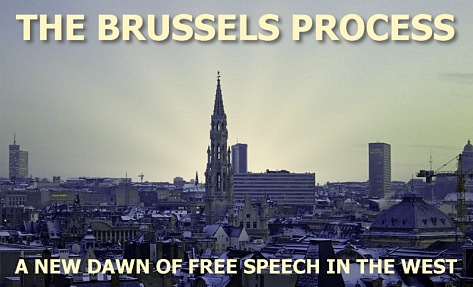 On Monday July 9, a much larger group (over a hundred people) gathered in an auditorium of the European Parliament to discuss free speech, civil liberties, the OIC, and what has become known as the “Istanbul Process”.

We assembled beforehand in the Place du Luxembourg in front of the monumental fascist edifice of the Altiero Spinelli Building in the core of the EU complex in central Brussels. When everyone was present, we had to pass through security in the building’s lobby before being ushered to our meeting room. 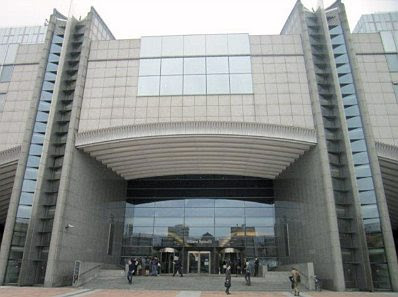 The fascist architecture was all around us. The message of all those huge, impersonal, ugly buildings seems to be: “You puny worm! How dare you think that your individual existence holds any value? This is the State, and you must submit to it!”

The auditorium itself was a somewhat more congenial environment. It was familiar to me from our earlier conference back in 2007, which was held in the same room.

When I sat down at the podium that morning, I saw a lot of familiar faces — people who were at Counterjihad Brussels 2007, and other colleagues I’ve gotten to know since then — as well as a host of new faces, many of them from Germany, France, and Switzerland. 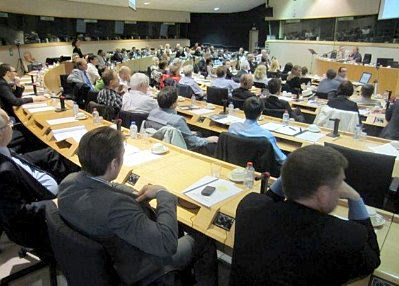 By holding our conference in the capital of the European Union, we became vulnerable to the automatic distaste that most ordinary Europeans experience when they contemplate the oppressive unelected behemoth that squats there in the heart of Brussels.

As Durotrigan remarked earlier today, “As a rule of thumb, anything political with ‘Brussels’ in the title sets alarm bells ringing.”

So what is to be done?

In order to change the illiberal, multicultural, and totalitarian associations of the word “Brussels”, a re-branding of the word is necessary. What if Brussels were to become associated with freedom of speech, individual liberty, respect for national sovereignty, and all the other concepts and characteristics that are anathema to the current rulers of the European Union?

This ambitious re-branding project began with the Brussels Declaration, a resolution designed to stand in contrast to the 1990 Cairo Declaration of Human Rights in Islam. By presenting our politicians and their media cheerleaders with the stark facts — that Islamic law violates the central precepts of both individual liberty and human rights as the West understands them — we intend to shine a light on the betrayal of our nations by the elites who govern them.