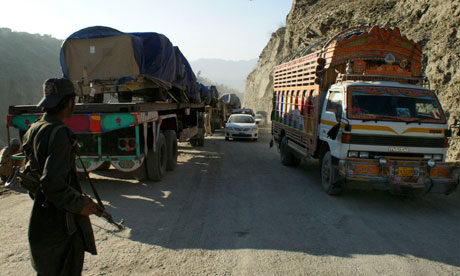 Nato trucks at the Pakistani border town of Torkham bound for Afghanistan: a senior western official claims an attack by Nato aircraft on Pakistani troops that allegedly killed as many as 28 soldiers was an act of self-defence. Photograph: Qazi Rauf/AP

An attack by Nato aircraft on Pakistani troops that allegedly killed as many as 28 soldiers and looks set to further poison relations between the US and Pakistan was an act of self-defence, a senior western official has claimed.

According to the Kabul-based official, a joint US-Afghan force operating in the mountainous Afghan frontier province of Kunar was the first to come under attack in the early hours of Saturday morning, forcing them to return fire.

The deadliest friendly fire incident since the start of the decade-long war also prompted Pakistan to ban Nato supply trucks from crossing into Afghanistan and to issue an order demanding the US quit the remote Shamsi airbase, from which the US has operated some unmanned drone aircraft. At border crossings, hundreds of supply trucks are reportedly stranded by the ban, with drivers fearing insurgents will take the opportunity to attack if they are not allowed to move.

A spokesman for Nato’s International Security Assistance Force (Isaf) said it was “highly likely” that aircraft which had been called into the area to provide “close air support” to troops on the ground was responsible for causing casualties among the Pakistani soldiers.

MORE HERE AT THE LEFT RAG.