Face the facts time. There is no such thing as a “moderate Muslim”, the are some who can be classified as “modernist” Muslims, the kind that take a cultural approach to Islam, or others like, Zuhdi Jasser, who believe (mistakenly) that they can reinvent Islam, though the weight of history, Islamic texts and their understanding, are decisively against them.

But lets be real here, those Muslims who favor a limited form of Islam are having their communities taken over by the fundamuslimists, and the main reason for this Saudi petrol dollars and all four schools of Islamic jurisprudence backing up the fundamuslim traditional reading of Islam. Only till our political leaders begin to confess the truth about this, can any positive policy be formulated.

It takes people who have lived under sharia and know the principle players that the West is engaging, who know the real truth. KGS 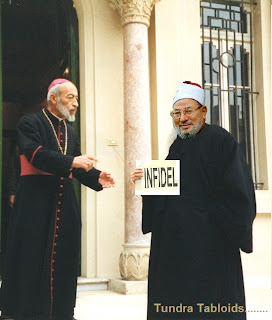 Habib Malik, a Lebanese Roman Catholic scholar and human rights advocate, recently warned Western countries to be on their guard against radical Islamic forces that present themselves as political “moderates” in countries such as Libya and Egypt.

“This is garbage, and nonsense,” said Malik, author of the 2010 book “Islamism and the Future of the Christians of the Middle East,” as he described the notion of “moderate” Islamic radicalism as a fantasy entertained by the West. “It doesn’t exist. There is no such thing. What appears to be moderate can, in an instant, flip and change.”