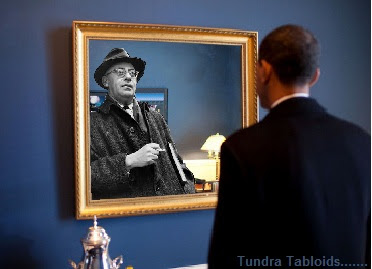 Mirror mirror on the wall, who’s
the most Marxist, me or Saul?
The man couldn’t really care less about the loss of confidence by the American people, he’s a human wrecking ball on a mission to level the United Sates’ financial, economic and judicial institutions. He cares no a whit whether the US financial markets and economic might plummets in standing, no wait, he does care, for he’s intentionally driving it into them all into the crapper.
The sooner this doofus is consigned to the ash heap of history the better, 2012 can’t come soon enough. KGS

Beyond the Liberal Spin: The Realignment Underway

The election is now over and the results are in – except in Alaska, Colorado, Washington, and a congressional district here and there. And one by one the usual suspects are weighing in with their comments. Most of these are utterly predictable, and some are downright mendacious, as one would expect.

When President Obama denied that the biggest Republican victory since the 1920s was a referendum on the policies embraced by his party and his administration, he was either lying or deep in denial – and the same thing can be said about The New York Times, which opined yesterday in an utterly predictable manner that – while “Tuesday’s election was indeed a ’shellacking’ for the Democrats, as President Obama admitted after a long night of bad news” – it “was hardly an order from the American people to discard the progress of the last two years and start over again.”

Mr. Obama was on target when he said voters howled in frustration at the slow pace of economic recovery and job creation. To borrow his running automotive metaphor, voters threw the keys at Republicans and told them to drive for a while, but gave almost no indication of what direction to drive in.

To believe this, one would have to be convinced that the voters were unaware that the Republicans were committed to repealing and replacing Obamacare, to extending the Bush tax cuts, and to reducing federal expenditures to the level of 2008. To argue its truth, one would have to ignore the Pledge to America – which is, of course, what our President and our erstwhile newspaper of record did.